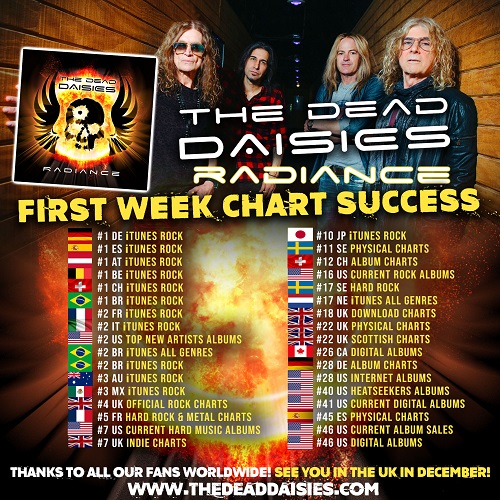 “Our sixth studio album ‘Radiance‘ is out today!

Strap yourself in people, ‘Radiance‘ is ten tracks of pure unadulterated rock. The thunderous rhythm attack of David, is accented by Doug’s lightning licks and fretboard tease. Glenn’s rock-solid bass grooves and unmatched vocal intensity are backed up by Brian’s pulverizing beats which only intensifies the fire!”

“‘Radiance‘ is another slab of butt-kicking rock! The guys all brought their A-Game and a tight, powerful record was created! I’m looking forward to everyone hearing it and playing more of these songs live in the near future!” Brian Tichy

“The new album ‘Radiance‘ is our 2nd album with Ben Grosse producing and mixing from top to bottom. We had a great time composing and recording the record and I’m very excited for you all to hear what we put together. Definitely a heavy album but with some cool twists and turns! Hope you all like it.” – Doug Aldrich

“We’re itching to return to England, Scotland and Ireland and deliver a massive dose of rock to our UK fans who count among the most die-hard in the world!”

“The UK is the foundational home of rock music. It is with great pleasure that we are announcing our return to the UK this December for a run of shows. We are really looking forward to seeing you, as we perform songs from our new album ‘RADIANCE’. The interaction between our band and the fans, is paramount. As a Brit, I can’t wait to get back to where it all started. We are one…” – Glenn Hughes