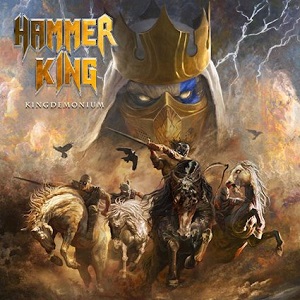 Hammer King are back to lay waste to whatever is left in the wake of Hammerfall’s release from just a few months prior. Seemingly supercharged by their last album, as well as the possibility of limited touring options, the band went right back into the studio to record a follow-up just over one year later. ‘Kingdemonium‘ will certainly please Power Metal fans overall and especially fans who have followed the band since their 2015 inception.

As with their last album, the band pull no punches with first track ‘Invisible King’. Picking up where they last left off, it’s a solid opening number that features all the typical metal tropes but with solid melody to back it up and awesomely thick background vocals that echo with sheer epicness.

The next track sees first single ‘Pariah is My Name’ erupt from the speakers. The way the song starts out slow with an underlying chorus of chants, pulling in the listener before erupting with an explosion sound effect that the band uses to perfection, the song is Power Metal personified.

Sequencing is everything in an album. That’s why it is great to hear that track three slows things down a bit after two powerhouse songs with ‘We Shall Rise’. A strong mid-tempo thick, heavy groove is just what is needed at this time. Like their previous release, the band knows that the faster tracks must be broken up to maintain a proper roll to the album. Slow down too much and the band can come across at tired but be too intense and you risk exhausting the listener.  Proper sequencing can give the album a proper ebb and flow and that is what happens here.

The best song on the album goes to the uniquely named ‘Live Long, Die Nasty’. This number needs to be the opening song in the band’s setlist. A great riff, a chorus with background vocals that beseech the listener to shout along, and lyrics about riding into battle to face your enemy.  Everything I would want from a band like this.  When music like this is done this well, tropes like this never get old.

Nearly every track on the album is as good as the previous tracks listed, but just like the previous album, one track here does not thrill me. ‘Guardians of the Realm’ starts out strong jumping from an opening mid-tempo into a double time pace, but then quickly goes back to a mid-tempo beat for the chorus. There, they make the unfortunate decision to throw in an acoustic guitar that is placed front and center in the mix.  This greatly reduces the impact of the track, making it sound like a song you would hear for an advertisement to a role-playing game.

Regarding comparisons between this release and their last album, both have various strengths.  Regarding production, I slightly prefer the last release. The new one is by no means poorly produced, but the intensity of the previous release is slightly muted with the new album. The last album’s sonics blew me to the back of the room. This one is strong but standard in comparison to other Power Metal releases. The previous album had a few tracks that I played on repeat for months and remain my favorite tracks from the band. With that said, ‘Kingdemonium‘ is a slightly better release. Overall, the songs resonate with me more and the album has less filler tracks. It plays better as a collective.

People can debate the songs between these two albums but undoubtedly the band have stepped up their game from their earlier releases, proving the last album was not a fluke. They are a band to be reckoned with, coming up with tunes that are the best the genre has to offer. If you love Hammerfall and would love to hear more music like that, then absolutely check these guys out. A fantastic release.