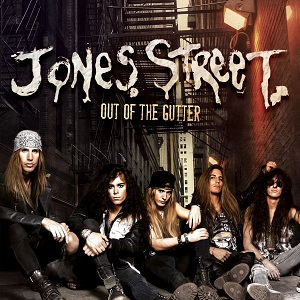 Review: Jones Street – Out of the Gutter

Eönian Records have a knack for seeking and finding just the right band to transport you back to that golden age of early 90s hard rock, right before grunge took over. They once again hit the nail on the head with Jones Street’s ‘Out of the Gutter‘, a slamming band that could easily sit alongside others of the time like Trouble Tribe, Roxy Blue, and Wildside. Founded by guitarist Jonny Jones, the band simply didn’t get the opportunity that the other bands did, it just came down to bad timing and luck.

The album gets off to a ripping start with ‘Dancin’ with the Devil’ a top-notch sleaze rocker that was very typical of the time period but now sounds refreshing in comparison to other bands of the current scene. Typical lyrics about living life on the edge do not detract from the playability of the track. I’ve played this song a bunch of times, especially while driving, and it gets me pumped every time.

Track 2 threw me for a loop. ‘Tell Me Why’ has a very unexpected opening with a steel guitar that makes the song sound like a country ballad, but don’t hit that fast forward button when listening for the first time, because it kicks into a straight up, blues-tinged rocker at the end of the first verse. The chorus has this awesome mix where a mandolin guitar is brought up to the forefront to play a different chord progression than the electric guitar. It makes for a great feel and elevates the track to be one of my favorite songs.

‘What Comes Around’ is next and it is as good as any hard/sleaze band track from the early 90s. This is one of three tracks produced by Vince Neil and Steve Stevens back when they were collaborating in 1992. To be clear, the tracks were produced by different people at different times and most sound similarly produced, apart from three of the tracks (with Track 10 being a demo, which I’ll get to in a bit).

Those first three tracks are my favorite, but the album has other strong songs like the drenched with swagger ‘Take Your Love’ (the playing between guitarists Jonny Jones and Mickey Perez really shines) and the screaming gang vocals in the chorus of ‘We Won’t Be Forgotten’ will have you shouting along to that track.

Regarding critiques, if you were to divide the album in half, the first half has the stronger songs and is better produced.  Tracks 6, 7, & 10 were recorded in a rehearsal room, not a studio, and there is a discernable difference in the sound, but nothing too dramatic, except for Track 10. ‘On The Edge’ is listed as a demo and sounds like a rough demo, so no points deducted for truth in advertising. Regarding the overall production, the sound of the band is like a demo that has been reworked to improve the sound, and they did a really good job with it. It’s still rough around the edges but that rawness fits the style of the music

The album contains two ballads (‘Thieves of Love’ and ‘When It All Comes Down’), and they are both generic and passionless. Bands back then were pressured (either by a label or internally) to come up with a hit single and that was usually in the form of a ballad. Some bands had no issues with this style while it felt forced for others. The latter pertains here. It was amazing to me how many women I saw fall for schmaltz like this back in the day.

If you were into the early 90s hard rock scene with all the bands that were being scooped up by labels in California in an attempt to find the next Poison or Warrant, then this band is for you.  The biggest compliment I can give is this band took me back to that time in my life when I was young, the scene was thriving, and this music meant everything to me. If you were around at that time, then this will surely make you feel the same.