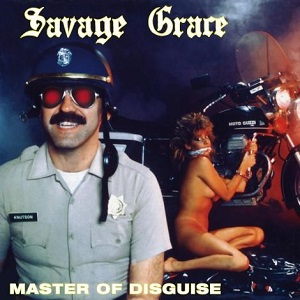 Speed Metal has I think always been one of those genres that causes confusion as it perhaps sits bordered by Metal, Punk, Rock and Thrash Metal with bands pulling influences from all areas or none at the same time. Savage Grace came out of LA at the start of the 80’s so arrived a bit after the start of the wave in the late 70’s, and do have that NWOBHM ramped up style, more aggression, speed and power in places, You can tell the origins of their influences from the first track ‘Lions Roar‘, it’s not about subtlety but there’s also plenty of melody involved in this one.

Having in the early days headlined shows over the likes of Corrosion Of Conformity, Dark Angel and Possessed indicates how highly they were thought of. Although they did not release much output during their most active period this is certainly worthwhile checking out. This Hammerheart Records reissue contains a Remixed & Remastered CD of the 1985 debut album ‘Master Of Disguise‘ along with ‘The Dominatress‘ EP and the bands Demo releases between 1982 and 1984. The second CD contains the original recordings of the Album and EP without the Demos, that’s a still a lot of music to work through.

There are some cracking tracks on this one, If Speed Metal is your thing or perhaps it’s jut not a genre that you have come across up until now then sit back and give this one a spin. Some of the standouts here for me are ‘Bound To Be Free‘, and the thunderous smashing drum into to the title track ‘Master Of Disguise‘.

No doubting the fact that Savage Grace were one of the better Speed Metal bands that got somewhat overlooked at the time and forgotten about since, this one is old school, for sure but that’s no reason to miss out on something.The remix is a very enjoyable  And if you like the material on show here them go check out the other full length albums ‘After The Fall From Grace‘ (also being re-released by Hammerheart in a Deulux version) and ‘New York Daze‘. It’s nice to get a good burst of Speed Metal from time to time.