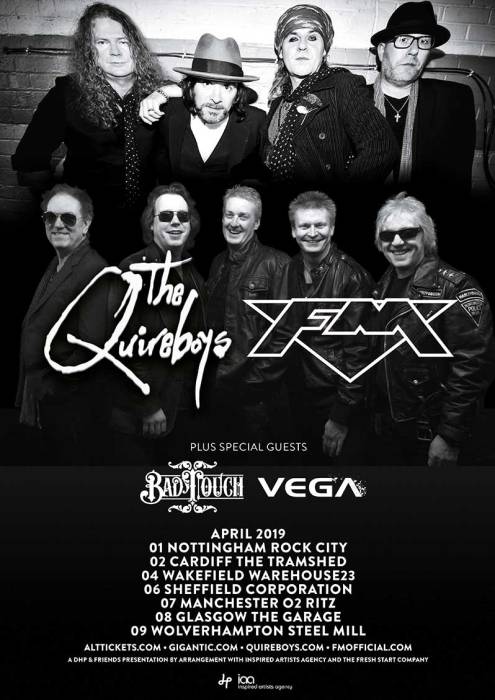 Norwich five-piece Bad Touch are happy to announce that they will be special guests on The Quireboys and FM co-headline nationwide UK tour in April 2019. Planet Rock will launch a 48-hour ticket pre-sale at 9am on Wednesday 12th December via www.planetrocktickets.co.uk and www.seetickets.com.

Tickets will then go on sale to the general public on Friday 14th December from the following online ticket retailers: www.alttickets.com, www.gigantic.com, www.seetickets.com and www.planetrocktickets.co.uk.

In addition to the above UK tour, Bad Touch will also play various festivals in 2019 including Giants of Rock in Minehead in January, Planet Rock Winter’s End in March and a welcome return to Leo’s The Red Lion supported by Collateral.

In October 2018, Bad Touch released their third studio album “Shake A Leg” via Marshall Records. The album received rave reviews and was followed by a UK Tour. The album, which featured the rock radio single “Lift Your Head Up”, was recorded in their home county of Norfolk at Orange Tree Studios and followed their critically acclaimed 2016 album ‘Truth Be Told‘ which featured the rock radio hit ‘99%‘.

‘Shake A Leg‘ takes a more personal and ambitious approach in song-writing and production due to the bands choice to write more spontaneously within the studio itself resulting in more emotional ‘in-the-moment’ performances. The new album features hand-picked songs that originate from a collective of all the members influences which they proudly wear on their sleeve. Known by fans and critics alike for having a reputation as a busy and hard-working band, Bad Touch continue to tour far and wide and are looking forward to playing tracks from the new album when they tour the UK in 2019.