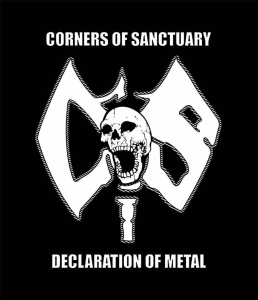 New Wave of Traditional American Heavy Metal band Corners Of Sanctuary (COS) have announced the release of ‘Declaration of Metal‘, a comprehensive, retrospective compilation of the band’s music, comprised of tracks from their past five albums: ‘Breakout‘, ‘Harlequin‘, ‘Axe to Grind‘, ‘Metal Machine‘ and ‘Driven Snow‘. Additionally, cuts from their first EP, ‘Forgotten Hero‘, and a brand new song, ‘Hyde No More‘, with new drummer Mad T and featuring Of Ancient Descent guitarist John Coonan (former Seeker, Corporate Mass), rounding out the compilation.

Guitarist Mick Michaels has checked in with the following comment:

“Corners of Sanctuary continues to charge forward. Declaration of Metal is surely a declaration alright; a declaration to keep moving forward and I’m very excited to be a part it,” stated Mad T. Mad T also appears on ‘Victoria’ and ‘Only One’, a song which he co-wrote with COS guitarist Mick Michaels.

“Declaration of Metal clearly creates a larger view of the band’s work and accomplishments, which is clearly presented by this capsulated musical portfolio,” stated the band’s AR Rep William Loney.

“Looking back, we can see how much we have grown as a band in the last five years. This compilation is a great way for fans to sample and experience our music, a well documented cross section of a legacy in motion,” said Michaels.

“This album represents where we have been and where we want to go moving forward. It is a collection of our works with a new twist that points us into the future. This is definitely represented in our newest track “Hyde No More“, added COS bassist James Pera.

‘Declaration of Metal‘ is being made available in two formats: digitally through Exquisite Noise Records and as a limited print US only CD through March Baby Media.

“When Corners of Sanctuary originally came to our attention, we knew this was going to be a group worth signing. These are some passionate and articulate guys who have their foot planted in the proud lineage of traditional heavy metal bands, but at the same time, they have a very modern and original sound all their own. This announcement of a greatest hits package could not come at a better time, as their star still seems to be rising, yet they’ve already accumulated a tremendous back catalog. We look forward to telling the world about Corners of Sanctuary!” stated Jason McGathey, owner of Exquisite Noise Records and Publishing.

The album can be ordered Here