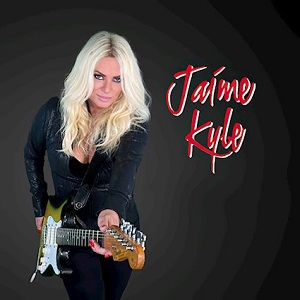 A trailblazer for women in rock, and known as the goddess of rock and blues, Jaime Kyle has had an immeasurable amount of success over her years in the industry, and has now released her new single ‘Driving With The Brakes On‘, featuring the amazing Kris Barras on lead guitar.

Jaime: “I was working on this album before covid. It was going in another direction and then I rediscovered how much I love singing blues. The riffing, being free to express myself vocally. With a rock edge, I feel the song soars with the painful emotional indifference and moody instability of not knowing what is going on in a relationship. Second guessing causes crashes. The forward motion stops abruptly, and I think you can hear the emotional frustration in my vocal. The music is haunting, hypnotic, and fiery all at the same time.”
Guest guitarist Kris Barras blisters on guitar.

Before Taylor Swift and Miranda Lambert, there was Jaime Kyle. Jaime was the first female rock artist to be signed to a major record deal out of Nashville. Her albums ‘The Passionate Kind‘ (Atco/Atlantic), ‘Back from Hollywood‘ (Now and Then, England) and ‘The Best of My Heart‘ (Frontiers, Italy and Nippon Crown, Japan) were critically acclaimed on Album Rock Radio. Throughout Europe she was dubbed “The Goddess of Hard Rock”.

“It was difficult breaking through. There weren’t many female producers and engineers, maybe a couple, and I was one of them.” Jaime learned to be scrappy and creative. When she was missing a musician for a Nashville session, she scoped out local bar bands and hired a bass player on the spot for a midnight session. The chain of events led to Nancy Wilson of Heart recording Jaime’s song ‘Stranded‘. The word “no” was never an option. When a record executive listened to a demo tape of ‘Wild One‘ and threw it down the hall, Jaime didn’t miss a beat. She picked up the broken tape, fixed it, and the demo found its way to Faith Hill. The rest is history.

Jaime writes for herself, but that doesn’t stop industry greats from covering her music. Faith Hill recorded ‘Wild One‘ which Jaime co-wrote and it made chart history as a debut artist remaining at number 1 for four weeks. ‘Wild One‘ was inspired by Jaime’s childhood experiences in rural Kentucky where imagination was her best friend and music her escape/ In addition to Faith Hill, ‘Wild One‘ has been covered by Kelly Clarkson, Carrie Underwood, Maddie and Tae, Runaway June on the Academy of Country Music Awards, Lauren Alaina on American Idol, and recently by Rebecca Howell on the hit show “The Voice”. Faith also recorded Jaime’s ‘Bed of Roses‘. Additionally, Jaime’s songs have been covered by Michael English ‘Heaven to Earth‘, Levon ‘With My Eyes Closed‘, Baton Rouge ‘The Storm‘, Howard Leese of Bad Company ‘The Vine‘, (sung by Jimi Jamison of Survivor), Jo Dee Messina ‘Let It Go‘, Lee Greenwood ‘Beautiful Lies‘, Joe Lynn Turner ‘In Your Eyes‘ and many more.

Jaime also co-wrote and performed the duet ‘Who I Am‘, a song which won multiple cinematic awards for the film “Forget Me Not” and she co-wrote, performed, and produced ‘That Night of Nights‘ from the movie “The Least of These: A Christmas Story,” which has become a sought-after holiday classic.

From singing tours in the U.S. and Europe to writing and recording sessions in Nashville, New York, and Los Angeles, Jaime Kyle continues to garner respect. “Everything I’ve gotten in this business is from the merit of the songs. The place where poetry, melody, and emotion meet are where you’ll find me and my music.”