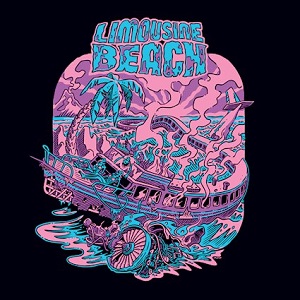 New York’s legendary underground label, Tee Pee Records, is thrilled to announce the signing of Limousine Beach and the release of the rising hard rock quintet’s debut album this April.

Fronted by towering singer and guitarist, Dave Wheeler, Limousine Beach is a thrilling new guise for the former Outsideinside and Carousel frontman. Especially considering that under the hood of this mighty new beast lies an impeccable assembly of individuals, all of whom are no stranger to acclaim. Formed in Pittsburgh in spring 2018, Wheeler is joined by three members of the metal band Cruces (guitarist Evan Mitchell, bassist Dan Hernandez and drummer Dan Bhutta), along with guitarist Jason Sichi of Fist Fight in the Parking Lot.

Following the release in 2020 of the band’s ‘Stealin’ Wine + 2‘ EP on the digital-archive imprint, Tee Pee Annex, teaming up with the label for their self-titled debut was something of a no-brainer.

‘Limousine Beach‘ by Limousine Beach will be released digitally and on vinyl on 15th April 2022 via Tee Pee Records. Stay tuned for further updates!