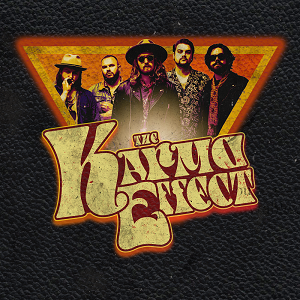 London’s vintage rock powerhouse, The Karma Effect have released a new single, ‘Wrong Again‘, on the eve of the release of their self-titled debut album (review here) out on TMR Rock Records on Fri 18 March 2022.

Mainman, Henry Gottelier, said of the new single, “The lyrics for ‘Wrong Again‘ paint the picture of a relationship at breaking point. I sing about the female character manipulating and ‘playing [him] for a fool’ over a long period of time, however this time is one too many and that she should now ‘be on her way’.”

The song is a classic tale of being metaphorically beaten down and walked over by a lover, but finally plucking up the courage to walk away. When writing the lyrics, Gottelier drew on experience from his own life, and the lives of others around him, stating, “I think we’ve all been in that situation at one point or another, or at least we all know people who have. It doesn’t have to be specifically about love or relationships though, it could be work, or friendships, or even family.”

Gottelier also goes on to explain the reasoning behind the slight alteration of the lyrics in the various choruses throughout the song, saying that “It represents how both sides of the relationship have wronged each other. The main character, I, was wrong for trusting this person could change. And the female character has been wrong in their actions, whether this be cheating, lying, or just in their manipulation.

“The song is simply about being wronged one time too many. The straw that broke the camel’s back!”

Formed at the start of the Covid pandemic buy a bunch of long-time school hood friends and musical acquaintances, The Karma Effect, are a 21st Century take on a classic 70s rock, roll n soul sound; big on keys, guitar riffs and huge vocal melody, all combining into a grandiose sonic soundscape that draws upon the best of yesteryear. Their debut album epitomises this philosophy. It’s a no-nonsense throwback, encapsulating the energy of good time, arena, rock n roll, brought bang up to date.
The album, ‘The Karma Effect‘, features 8 scintillating songs, written in solitary bedrooms and over zoom calls as the world tackled (and continues to tackle) a desperate viral pandemic… songs that have only recently seen the light of day via a handful of live UK shows.

The guys play their SOLD OUT hometown album launch show at The Crown Inn, Old Oxted on Fri 18 March 2022. Joining them as guests will be Hunted By Elephants.