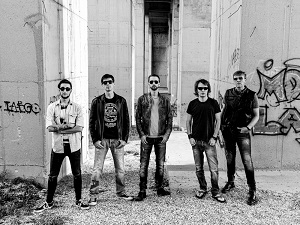 Originally self-released digitally in 2020, ‘Rock ‘n’ Roll Rebirth‘ has been completely remixed and remastered. A new logo and cover art have been designed for this new edition by the talented Aeglos Art (Platens, Raintimes, Michael Kratz, Wheels Of Fire, Alchemy), who also developed all the CD graphics.

Guitarist & founding member Davide Falconetti, talking about the album, says: “After a long wait, the time to release 5YG’s debut album has finally come. The deal with Sneakout Records comes at just the right time, some of these songs have waited far too long before they could be officially released, and I can’t wait to have the opportunity to present the project live with my bandmates, and to be able to share it with YOU, rock fans! We are focused on the release of the album and we are already working on a lot of stuff: the rebirth of Rock ‘N’ Roll has just begun”.