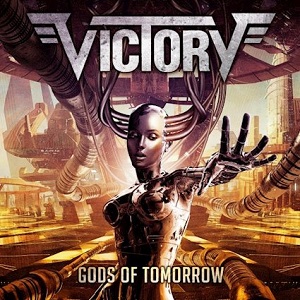 Victory return with a new album after a 10-year absence and with fewer original members (only longtime guitarist Herman Frank remains).  You would think with such a change in band members it would in the best of situations change the fundamental sound of a band that has been around on and off since 1984. Admittedly my knowledge of Victory is limited to owning their ’89 release ‘Culture Killed The Native’ so it’s tough to compare their trajectory over the years, but I’m here to tell you that this is an incredible sounding album and surely must be one of the highlights of their career.

The album tackles many different styles of rock and metal, all of them expertly handled, making for an exciting and unpredictable collection. It opens with ‘Love & Hate’ with its guitar note plucking groove, solid bass line, and catchy melodic chorus. From there you’re thrown into the fast-paced double-based title track and then the band goes for a southern rock/metal sound with first single ‘Cut To The Bone’, a song that has the type of groove that could have easily been found on Cinderella’s Night Songs LP.

From there the album goes from strength to strength. You got the mid-tempo passionate rocker ‘Unconditional Love’, the high-tempo inspirational powerhouse ‘Into the Light’ (I’m a sucker for songs about overcoming adversity), ‘Rising Force’, which is reminiscent to the metal band Iron Savior (particularly in guitar tone), and slower but thick grooved ‘Mad’. One of the best aspects of this release is the proper running order of all the tracks. Slower and faster melodies are properly balanced while also maintaining consistent heaviness and grit.

Fans who are worried that there might be too much of a drastic change will be happy to know that singer Gianni Pontillo is vocally on par with ex-Victory singer Fernando Garcia. Their vocal tones are so similar that when I first heard the songs without reading the press release, I thought Fernando was back in the band. The man does a fabulous job on vocal duties and sings with power and conviction.

I bought ‘Culture Killed The Native’ a decade ago and enjoy the album, but without a doubt this new album is a stronger release. Thirteen total tunes and not one weak track on the album. It’s remarkable that a band consisting of newcomers can gel with one of the original members of the band, creating what will surely be regarded by longtime fans as either a return to form or possibly one of their best releases. For any band to carry on a legacy for nearly 40 years and produce quality material is remarkable. For those not familiar with the band, no matter what your tastes are in terms of sub-genres of rock and metal, you are bound to find something to love here.  What this means for me is I need to go back and check out their other releases, knowing that this album will have set a very high bar.

Don’t let this album pass you by.