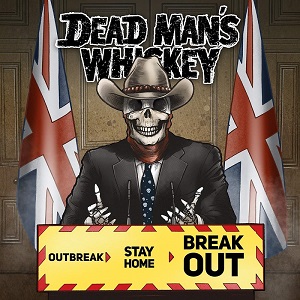 The timing couldn’t of been better for the arrival of Dead Man’s Whiskey‘s ‘Breakout‘ EP to land in my inbox, as I’ll be seeing them live on Saturday at Stonedead Festival, (the band won the opening slot in a competition run by Stonedead).

To be honest it’s been a while since I’ve seen them, and not just because of lockdown, so some new tunage is most welcome.

Let me say from the off, the band’s decision to have John Mitchell (Alter Bridge, Architects, Enter Shikari and Inglorious) handle the production was certainly right. As I’ve said before on many an occasion, bad or poor production can just kill a decent album/song!

Kicking off proceedings is ‘Sleep When I’m Dead‘, and straight away this takes the band up a level or two over the previous release, 2017’s ‘Under The Gun‘. Not that ‘Under The Gun‘ sounded crap, and it was tweaked/remastered in 2019, it’s just that it sounds more open, like the track’s been allowed to breathe.

‘I Am Here‘ is up next, the band state that it’s “pretty out of genre for us“, don’t really hear why, just a great hard rock song. The band’s latest single ‘Breakout‘ follows, not too shabby, but not as good as the two proceeding songs imho.

‘Never Ever‘ brings them back on track, with great riffage, and frontman Nico Rogers‘s vocals sounding trademark gruff while remaining musical.

Which brings us to the fifth and final song on the EP. ‘Make You Proud (Piano Version)‘ which sees the band delving into ballad territory but without the treakly sweetness that can spoil things. Without doubt a standout track, which along with ‘I Am Here‘ is my favorite track on ‘Breakout‘.

To sum up, ‘Breakout‘ showcases a band growing and streching out in what is becoming a competitive music scene here in the UK. Well worth spending your pocket money on.

For those of you not heading to Stonedead this Saturday, Dead Man’s Whiskey have a headline UK tour this Autumn.