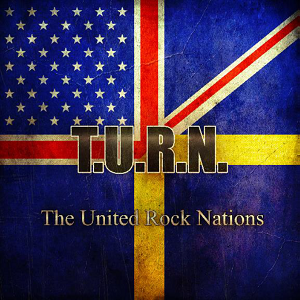 The United Rock Nations (T.U.R.N) is a band formed by musicians from several different countries (Sweden, USA, and England).  Their debut album took three years to write.  According to the band’s bio, “The United Rock Nations (T.U.R.N) is a quality band that has broken the norm of music making”.  I’m not sure why a band would label themselves as “quality”, but after listening to their debut album, I can assure you that “quality” was the furthest thing from my mind.

This album was a struggle to get through.  Opening track ‘Demons‘ is an good indicator of what’s to come and everything that is wrong with this album. Lead singer Daniel Valberg’s vocals, when he’s up a few octaves, are reminiscent of Dangerous Toys’ Jason McMaster, but goes completely out of his vocal range during the chorus, to the point of becoming screechy. The guitar riff is also quite generic and boring.  Unfortunately, this pattern is repeated on most of the tracks on this album, and then there’s ‘Love Shack‘. While not a cover of the B-52s track, it’s simply unlistenable and epitomizes everything that is wrong with this album. I actually wish it was the B-52s track. I hate that song, but at least it didn’t make me want to rip my hair out. Not that I keep a track of worst songs of the year, but if I did, this would surely make the Top 5. The whole band is to blame for this mess, with terrible vocals, fills, and muddled notes making the song something you would expect from the worst bar band out there.

The sad part is the entire album is not like this. There are a few tracks that show a band with potential. The absolute highlight of the album is the ballad ‘Shine‘. When the singer shows some restraint, he’s actually quite good. The band brings their “A” game here as well as the track ‘Forgotten Souls‘, a rocker that sees the singer once again scream through the chorus, but at a more controlled pace and range. The solo is also well done and memorable.

So the big question is, “What happened here”? Clearly the band is capable of crafting decent sounding songs. I’m taking some educational guesses here, but there does not seem to be a producer who was able to reign in all the problematic parts and critique the changes that needed to be made.

The reason for a lack in production may be due to the fact that the band wrote and recorded this album in a process that took several years and, based upon the different countries the members live in, was pieced together slowly over time. There’s a chance that at no point were all members of the band together in the same country recording this album. With the members separated by distance and distracted by other things going on in their life, they put this album together whenever they could get to it.

If this band is to record albums in the future, they need to make this band more of a priority if they hope to have any success in a field that is saturated with much better sounding bands.