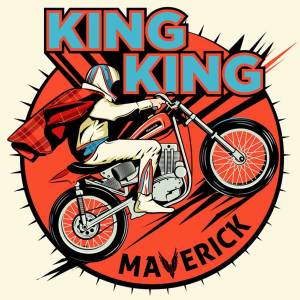 Ah – been looking forward to hearing this one based on the lead track ‘I Will Not Fall‘. I first came across these guys when they supported Gun at the Barrowlands some years ago. In fact, it was Jools Gizzi from Gun who told me to come early to see them! And I wasn’t disappointed and subsequently bought the albums. The band has changed somewhat in terms of membership in the last year or so and we now also have the incredibly talented Stevie Nimmo on guitar augmenting his wee brother Alan. Having seen the Nimmo Brothers perform together previously, I can’t wait to see this line up of King King live. Anyway, to the album.

Opening song ‘Never Give In‘ kicks off and any concerns about changing line-ups is blown firmly out of the water. Built around a big staccato guitar riff, this is melodic blues rock of the highest order. And Alan Nimmo sounds the best he has sounded in a long time with his soulful, bluesy and effortless vocals – maybe having Stevie in the band has created some healthy competition as he is no slouch vocally either. Next up is ‘Fire In My Soul‘, and this picks up where the opener left off with quality blues rock.

The tone and tempo changes for ‘Whatever It Takes To Survive‘. This opens with some soulful vocals from Alan Nimmo over tasteful guitar and keyboards and builds into a powerful chorus. The song rises and falls throughout with great guitar playing in the mix also. The pace is picked up with ‘I Will Not Fall‘ with an almost dancey rhythm and keyboard riff – absolutely killer. We drop back into ballad territory with the wonderful piano and vocal opening to ‘By Your Side‘. And what a great bridge and chorus before the rest of the band join in and the song changes somewhat into an almost early Foreigner-style ballad. This perfectly demonstrates the melodic strength of the song-writing on this album. And we are only half-way through!

‘One World‘ opens the second half of the album and is another song with slight dance tendencies, a la Steely Dan, with the great keyboard work and a superb vocal melody. The upbeat feel continues with the opening of ‘Everything Will Be Alright‘. Kicking straight into the song with lead vocals from the get go, it drops into a laid back segment before picking up and building to the chorus.

‘When My Winter Comes‘ is another song opening with piano and vocals to great effect. In fact the song continues in that mode and with another killer chorus, is captivating to say the least. The pace is picked up with a driving bass and drum rhythm for ‘Dance Together’. Ironically, although the word dance is in the title and considering the upbeat dance feel of some of the songs, this is one is a straight ahead blues rocker and it just pumps along nicely. The closing song is appropriately called ‘End Of The Line‘. Driven by a funky rhythm in the verses, it has some great soulful vocals and then picks up for the big chorus. Superb stuff!

For me, this is King King at their best. I loved the last album, but just felt it was maybe a little over-produced and the band lost that soulful edge Alan Nimmo brings with his playing and singing. This is just superb – top notch song writing, top notch vocals and production/mix that brings the best out of both in my humble opinion. To use the Glaswegian vernacular – it’s a pure dead belter by the way!