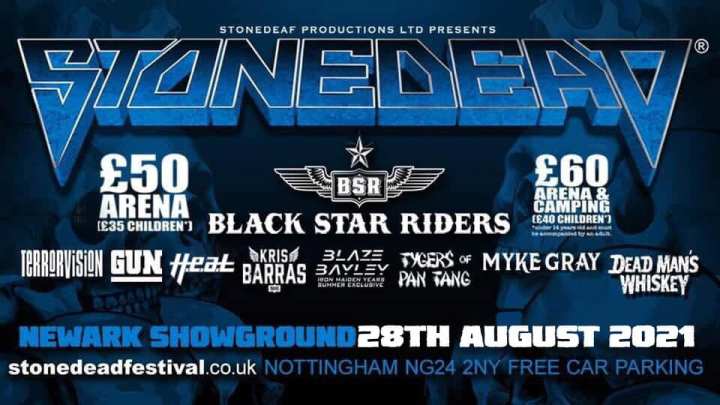 After we all experienced the disappointment of 2020 being cancelled due to uncertainty over COVID19, we have put our thinking caps on and in conjunction with MMH decided that the Friday Rock Party 2021 will have some VERY SPECIAL GUESTS joining us. This offer is only available for WEEKEND CAMPING tickets.

The plan is to kickstart the weekend off in style, get your tickets before they are completely sold out.

The 2021 line up remains the same: Black Star Riders are currently one of the most exciting bands in the rock world. Formed in 2012 with Ricky Warwick (Vocals), Scott Gorham (Lead Guitar), Robbie Crane (Bass) Chad Szeliga (Drums) and Christian Martucci (Lead Guitar). They are often billed as the next step in the evolution of Thin Lizzy howeverBSR offer far more that that: high energy rock anthems with skilfully intertwined guitars, extremely powerful vocals with a unique sound designed to leave you wanting more. BSR released their debut album ‘All Hell Breaks Loose‘ (2013) which was promptly followed by ‘Killer Instinct‘ (2015), ‘Heavy Fire‘ (2017) and ‘Another State of Grace‘ (2019) proving that BSR continues to hone their craft as a band, in that you can feel their chemistry on stage.

Certainly a fitting headline act for the Stonedead 2021 Tommy Vance stage. Rock party band Terrorvision are enjoying a resurgence of their popularity, following the ‘Britrock Must Be Destroyed Event’ which saw the band play alongside other 90s iconic bands: Reef, The Wildhearts and Dodgy in 2018 and a number of shows to celebrate the 20th Anniversary of the release of the iconic LP ‘Regular Urban Survivors‘.The lineup of: Tony Wright (vocals), Mark Yates (guitar), Leigh Marklew (bass), Milly Evans (keys) and Cam Greenwood (drums) will certainly take the party up a notch in August and should not be given the label of a nostalgia act. Terrorvision has true Yorkshire grit with a host of hits from Tequila, Alice What’s the Matter, My House, D’ya Wanna Go Faster to Oblivion, the vibrant rockers guarantee to get you bouncing, singing along and waving your arms in the air.

Legendary Scottish rockers GUN will bring an arsenal of hooky riffs and catchy songs to the Stonedead 2021 Tommy Vance stage. Celebrating 30 years since the release of their 1989 debut album ‘Taking on The World‘, which saw the band tour with The Rolling Stones on their Steel Wheels tour in 1990. Momentum continued to gather when the band release ‘Gallus‘ in 1992 and an arena tour with Def Leppard followed. The Glasgow quintet recently released the double album ‘R3L0ADED‘, featuring an amalgamation of their best singles from the band’s seven albums such as Steal Your Fire, Better Days and Don’t Say It’s Over, and a collection of cover songs, including the song that gave them a household hit Word Up by Cameo, for which the band won the prestigious MTV Europe Music Award for Best Cover. Dante Gizzi (vocals), Jools Gizzi (guitar), Paul McManus (drums), Andy Carr (bass) and Tommy Gentry (guitar) never fail to deliver, and are guaranteed to put on one hell of a show for the Stonedead faithful!

H.E.A.T has established themselves as one of the leading touring melodic rock bands currently around and we are excited to announce that they will play at Stonedead. With their most recent (self produced) 6th album ‘H.E.A.T II‘ which was released in February 2020, H.E.A.T bring powerful melodic vocals with a very big sound. The album goes back to the beginning in style, but brings with it the experience they have gained along the way. H.E.A.T always ask their fans what they want to hear during a set and we are sure that their set for Stonedead will be no exception.

Birmingham’s very own Blaze Bayley returns to Newark having previously performed in 2018 with Wolfsbane; this time bringing a UK summer exclusive of his Iron Maiden years.

Singer and guitarist Myke Gray founder and song writer of Skin, Jagged Edge and Red White and Blues will be bringing us something very special he has been working on in lockdown.

London based Dead Man’s Whiskey have rapidly built a reputation as a hard working ‘one to watch’ U.K NWOCR band. With big vocals, huge guitar hooks, energetic performances and catchy as hell choruses, this 5 piece will offer a scintillating performance to kick off Stonedead Festival. The production team feel that Dead Man’s Whiskey have definitely gravitated from ‘ones to watch’ to ‘right here and now’ and are a deserving winner of the Opening Poll Competition.

The legend that is Krusher Joule is acting as compere for the day. Stonedead’s stellar line-up aims to excite both classic and new rock fans in providing a unique one day, one stage festival where the music is loud, the beer and food are priced competitively and you can camp / park 5 minutes from the level ground arena. The festival is solely organised by volunteers and created for music fans, Stonedead is a festival experience not to be missed. With a free signing tent brought to you in conjunction with Planet Rock Radio. We have a dedicated covered wellbeing areawith seating and sun cream! We allow alcohol to be brought into the arena – 4 cans of ready mixed spirits or beer / cider.

Tickets: www.stonedeadfestival.co.uk/tickets With free car parking and only a small excess of £2 per van for caravans / campers

Children over 4: £40 (camping), all children under 4 are free entry (Under 14’s will not be able to access the Friday Night Rock Party and all under 14 years must be accompanied by an adult in the area)

Disabled access: tickets are free with email proof. We have a staffed viewing platform, sheltered covered chill out zone available during the festival opening times for those who need it, with a fridge for medication, accessible toilets, and for those with disabled access camping tickets there are permanent shower facilities.