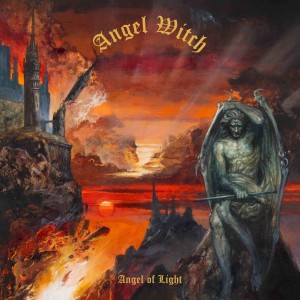 Angel Witch were formed in the mid-1970s and were part of the New Wave of British Heavy Metal alongside such stadium acts as Iron Maiden, Whitesnake and Def Leppard. Although they were never as successful, they were incredibly influential as hearing them encouraged Lars Ulrich to form Metallica. They have an interesting claim to fame as the least successful chart artists ever in the UK as their single Sweet Danger spent one week at Number 75, the lowest possible position for a registered chart entry. Of course, heavy metal is not a genre that gets a lot of chart time, so it’s a very poor indicator of quality! They have just released a new album ‘Angel of Light‘, so let’s see what has kept them going for so long.

The driving guitars and drums of ‘Don’t Turn your Back‘ start off the album in blistering fashion with echoes of both Iron Maiden and Judas Priest. It is a fantastic tune that explodes out of the speakers and immediately tells you that this isn’t a group resting on past glories.

‘We are Damned‘ starts off with a guitar riff that sounds completely different from the usual driving guitar and gets the song into its stride from the first note. The vocals of Kev Heybourne are as good as any heavy metal singer going around and they give the song a real depth of quality.

‘The Night is Calling‘ is the seemingly obligatory metal ballad that appears on so many NWOBHM albums. Just as well its so good! Duelling guitars, brilliantly played by Will Palmer and Jimmy Martin lift this song above the mass of half-hearted ballads that you hear on the radio and it is pure class.

‘Condemned‘ continues the incredibly high quality of this release and makes you wonder if there’s a parallel universe where Angel Witch are playing massive stadiums and Iron Maiden are scraping a living whilst being seen as an inspiration by many other groups! It just seems so arbitrary at times, the way one group is successful and another, just as good, is largely ignored.

‘Window of Despair‘ is built round Jansson’s drumming once again as he shows that there are very few heavy metal drummers who can live with him. ‘I am Infamy‘ is a tune that starts off quietly then builds and builds really cleverly as it leads into Heybourne’s powerful spine-tingling vocals. ‘Angel of Light‘, the title track finishes this incredible album off in a blaze of glory.

All four members show their musical pedigree on this marvellous album and make it clear that far from being elder statesmen of the rock movement going through the motions, they are vibrant, energetic and as vital as they have ever been.