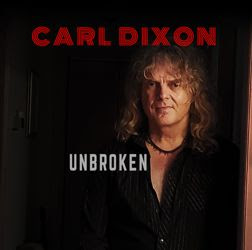 Carl Dixon is better known as silver throated singer of Canadian melodic rockers Coney Hatch. They were the classic example of critical success and had three magnificent albums in the 1980s. The last of these was the humungous ‘Friction‘, which to this day is still one of my favourite albums. I did see Coney Hatch in 2014 at Firefest to coincide with their comeback album ‘Four‘. However, I must confess, I haven’t really kept up with Carl’s solo career, so I was intrigued to get this one to review.

Opening with ‘Can’t Love a Memory‘, this is a pacey, melodic rocker that illustrates just how much influence Dixon exerted over the Coney Hatch sound. And the man hasn’t lost his voice either! Great start! The intro of keyboards and guitar are reminiscent of Journey for the next number. Called ‘Bowl Me Over‘, once the song kicks in properly it is another riff-lade melodic rocker and I am back in 80s heyday of melodic rock. The clean guitar intro belies the pacey melodic rocker that is ‘Nothing Lasts Forever‘. Lyrically the song is obviously a biographical song about Carl’s days in 80s with Coney Hatch and takes me back to my own days in the 80s with Moritz when I lived in London.

‘Every Step of the Way‘ has an almost contemporary rock intro but then kicks into a great staccato guitar riff with overlayed lead licks. Another well-arranged and executed melodic rocker with great light and shade. There is a harmony vocal intro to ‘Summer Nights‘ but the song doesn’t turn into the poppy summertime melodic rocker I anticipated. Instead what get is a more complexly arranged number which ebbs and flows with a number of changes of beat which work well. Next up is ‘All My Love and Hopes for You‘, which is a ballad. For me this is possibly the weakest song on the album and just doesn’t really get going, albeit there is a pretty catchy chorus. Maybe one that will grow on me with a few more listens.

‘This Isn’t The End‘ opens with an archetypal Coney Hatch guitar riff and continues in that vein and could easily sit on Outa Hand, Coney Hatch’s second album. Another great melodic rocker. Continuing in that vein, ‘Drive Just Drive‘ opens up a like a track from ‘Friction‘ and is another powerful melodic riffing rocker. However, the chorus is a little weak for me compared with the rest of the song. Good none the less! Next song, ‘Roll the Dice‘, just picks up from the last song and delivers another solid slice of melodic rock with some nice guitar work too.

With a sequenced keyboard intro and guitar lick over it, ‘Keep the Faith‘ is more 80s AOR than straight forward melodic rock. Again, this song didn’t quite gel for me until after a couple of listens, but once it did it really grew on me. Last but by no means least, is the title track ‘Unbroken‘. This strangely sounds a little like Eden’s Curse with the guitar playing, especially the harmony guitars. A mid-paced rocker it fittingly brings the album to a close.

This is a great album, but unlikely to make Carl Dixon many new fans. There are some great songs here, but it lacks a little in consistency. However, there are no fillers. If you like Coney Hatch and you are looking for a new fix, then my advice would be to get a hold of this and you won’t be disappointed.