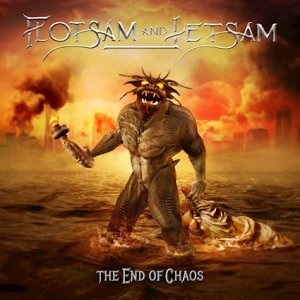 Review: Flotsam And Jetsam – The End Of Chaos

In many ways Flotsam and Jetsam are not only one of the heavyweights of the Thrash Metal, a band during 90’s for me far ahead of their time but also one that has so often been underrated in the genre. Something that has perhaps become quite a common thread in reviews I write, but something that could again hold back an album like this is the current need for immediacy in music, and perhaps to a certain extent the older generation that see’s their free time reduced and therefore the ability to sit and properly listen to music is no longer there, this again is an album you need to live with a bit.

What we have grown to expect from this band is a more mature often melodic style of Thrash, well written songs and it’s always most importantly tight as hell and Metal. The band have always had one of the more original sounding vocalists in Erik A.K, and that is still true today. To have existed as a band for 38 years is no easy feat in itself, and there has been a fair share of ups and downs, but to continue to make albums of this quality is a great sign of the hard work they continue to put in. Having listened to the album a lot over the last few weeks it just continues to grow on me, the songs stay fresh and I haven’t wanted to put it down, it’s on constant rotation as I travel around the City and that is never a bad sign.

Of the eleven tracks on offer here you will be grabbed by the power of ‘Control‘ which is just class, everything in proportion, pounding drums, screaming guitars and a layering that just drives it all home, there’s a nice anger in Erik’s vocal delivery on this one too that fits perfectly to the tune. Alongside this we’ve got other highlights including ‘Demolition Man‘ which a really nice bass line, spitting guitars, it’s another no holds barred track and ‘Unwelcome Surprise‘ which just smashes you right in the face and keeps going, pacey, crunchy goodness. Going to be really interesting what they pick from this album to their live set as there are many options.

This is another excellent release from a band that never really went away but appear to have become totally reinvigorated in recent years, there’s power, control and just some really excellent tracks that have translated brilliantly in the live environment. F&J will be hitting the UK in March with Overkill and again in July for the Amplified Festival. Do yourself a favour and get this one, if you are a fan of Thrash, heavy music or just good music, this is one that is sure to satisfy a lot more than just old school fans. Top stuff from a band all too often referred to as the one Jason Newsted left to go to Metallica, they have continued to be relevant in a scene where so many of their peers lost the creative spark many years ago. 2019 sees a band with a great lineup that seems to be working so well together, creatively and live, plenty more to come from this band.