Swedish melodic hard rock band Reach, have released ‘Running On Empty‘ music video. The track is taken from the new album ‘The Great Divine‘, out in Japan on February 21st and globally on February 23rd, 2018. The album was recorded at Rocksta Sound Studio, produced by Jona Tee (H.E.A.T) and mixed by Tobias Lindell (Europe, Avatar, etc).

The new material consists of 10 songs written by Ludvig Turner ranging from the modern up-tempo ‘Running On Empty‘ to the spooky ‘Nightmare‘, the moody ‘River Deep‘, the catchy ‘One Life‘ and the straight forward hard rock tune ‘Into Tomorrow‘ that sets the opening for the album. 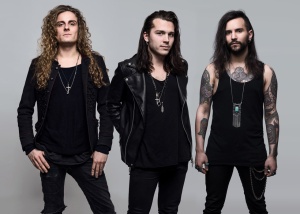