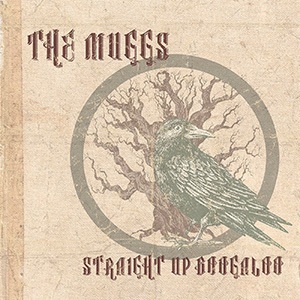 Review: The Muggs – Straight Up Boogaloo

One could use the phrase never judge a book by it’s cover, or in this instance, an album by it’s title.

This is the fourth album from the Detroit three-piece, of Danny Muggs (Danny Methric, vocals/guitar), Tony Muggs (Tony DeNardo, keyboards) and Todd Glass (drums). I discovered that some years ago Tony DeNardo suffered a life threatening stroke which left him paralysed and unable to speak. However, after many years of trying, he found he was able to play his bass parts on a Fender Rhodes keyboard.

The album kicks off with ‘Applecart Blues‘ not a ‘traditional blues track by any means but a modern pumping rock song that will have you turning up the volume. ‘Fat City‘ has a sixties groovy feel to it, much more laid back then the opener. ‘Lightning Cries‘ very much slots into a particular blues rock vibe that seems to be rising in popularity and as such is very much to my personal taste.

Next we have the wonderfully titled ‘Spit & Gristle‘ again falling into the gritty blues rock realm. Then a Led Zeppelin style riff fills the air as we launch headfirst into ‘Roger Over And Out A‘ a cracking song which leads you into ‘Roger Over And Out B’ a simple song with acoustic guitar and an atmospheric vocal interspersed with soundtrack type clips.

Things are very laid back when it comes to ‘Blues For Mephistopheles‘ a modern blues track which wouldn’t be out of place on say a Rival Sons album.

‘Tomorrow’s Dream‘ follows which is a cover of a Black Sabbath track but with a Rival Sons twist, and it’ll certainly get your foot stompin’

The title track ‘Straight Up Boogaloo‘ starts with a great radio promo voice over before you get exactly what it says in the title, boogaloo rock n’ roll! Elvis influences are very evident and you envisage a classic trio with one on the double bass pounding the strings.

‘Rattlesnake Shake‘ is southern blues rock, written of course by Peter Green, with all the right ingredients, stretching out to just under twelve minutes of superb music.

How do you follow that? Simple, with a Lennon/McCartney song, namely ‘Yer Blues‘ and what a great version too. The final track ‘Theotis Toddlinski Outtakes‘ is not a song but voice over outtakes delivered in a deep ‘voice over guy’ style!

To sum up, I absolutely love this album and wouldn’t hesitate in recommending it to you the music lover.