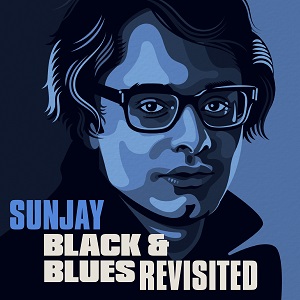 “‘Statesboro Blues‘ was written by Blind Willie McTell and first recorded in 1928,” says Sunjay. It’s country blues with a touch of gospel. This version also combines lyrics from Church Bell Blues by Luke Jordan. ‘Daddy died and left me reckless, mama died and left wild’. Having sung these lines hundreds of times before my mother passed away. It was an extremely emotional experience. I had to belt it out because I just couldn’t do it gently, the words got stuck.”

‘Black & Blues Revisited‘ produced by Sunjay and Josh Clark at Get Real Studios in Bath, UK marks a significant passage of time in Sunjay’s life. “I’d just started recording the album when my mother suddenly and tragically died,” says Sunjay. “There was so much to deal with, the shock was huge, and it took me a long time to recover. Thankfully Josh enabled us to keep the momentum going as he continued to work on various things until I could record again. Music has always been my catharsis. I’m grateful that I’m now in a much better place both personally and musically.

My mother was born in Goa, India. She gave me my forename, Sunjay. Though always very proud of me, I think there were cultural expectations of me becoming a Doctor or Lawyer! My father who (is British) taught me to play guitar initially, and I inherited his love of blues music.

Faced with these challenges I feel far closer to these songs now than I’d ever done before. Some of these songs, in fact most of them, I’ve been singing for years. However singing them now has a whole different meaning. In the Blues, references to death, the devil etc aren’t usually very far removed from real life.”

“A very accomplished and dynamic guitarist, with a mature
stage presence and echoes of a young Ralph McTell.”
– RNR Magazine

“Already creating a stir with talents way beyond his years. A really
soothing, natural sound and most definitely destined for bigger things.”
– Maverick Magazine

Listening to ‘Statesboro Blues‘ and ‘Living With The Blues‘, you can feel that raw emotion. Sunjay’s voice sounds more edgy than it has on previous albums. There’s a willingness to sing straight from the heart, to let the listener hear him at his most vulnerable and somehow evoke feelings of, ‘hey, it’s ok, come and sit with me a while’. While on other tracks like ‘Freight Train‘ and ‘Come Back Baby‘ we hear the more familiar warm sonorous vocals that we’ve become accustomed to hearing from Sunjay.

This is new territory for Sunjay, territory that’s unfamiliar to him as well as to the regular Sunjay listener. Have no fear though, it’s wonderful to hear the growth between albums. “When I was younger, I always got told – you need to suffer to be able to sing the blues. Well, now I have.” says Sunjay, a wry smile that those accustomed to his live performances will be familiar with. He has a unique ability to craft equal parts sadness and humour into songs and stories alike. At 28 years old he seems to have the experience and wisdom of somebody much older. Though as he’s keen to point out, “That’s only because I’ve made so many mistakes…”.

BUILT FOR COMFORT
Originally written by Willie Dixon and first recorded in 1959. Raunchy, powerhouse vocals, driving rhythm and wailing harmonica. A great opener for an album of blues material. There’s an extended music break in the middle where Sunjay’s faultless guitar skills are showcased, followed by a organ/piano, call and answer, interspersed with great bluesy harmonica.

STATESBORO BLUES
Blind Willie McTell recorded Statesboro Blues in 1928. Country-Blues with a touch of gospel. This version also combines lyrics from Church Bell Blues by Luke Jordan. ‘Daddy died and left me reckless, mama died and left wild’. Sunjay explains that having sung these lines hundreds of times before his mother passed away, singing them after was an extremely emotional experience. “I had to belt it out because I just couldn’t do it gently, the words got stuck”.

KEY TO THE HIGHWAY
A Big Bill Broonzy/Charlie Segar co-write. Segar, a blues pianist recorded it first in 1940. Swinging blues that’ll have you clicking your fingers or clapping your hands. An ‘I’m leaving you and won’t be coming back’ kind of song. Walking bass lines on the guitar with swirling Hammond riffs and more wailing harmonica.

HESITATION BLUES
Ragtime guitar picking at its finest. Gentle drums and bass backing up Sunjay’s vocal and acoustic guitar. A song that explores the trials and tribulations of a man concerned about whether or not to engage with a prostitute. This version is much cleaner than historic versions, which in parts could be extremely vulgar! The song is listed as traditional, though many have claimed they wrote it.

LIVING WITH THE BLUES
Initially this was going to be the lead track on the album. “From my childhood, where I am now, I ain’t gonna worry, I’ll get by somehow”. Words to live by. A mid-tempo song with a laid-back feel, despite the rather heavy subject matter. Living With The Blues was written by Brownie McGhee and his wife, Ruth. First recorded by Brownie in 1959, released as a single and later recorded with musical partner Sonny Terry in 1961.

MONDAY MORNING BLUES
A Mississippi John Hurt tune, first released as a live recording in 1963. The second finger-picking song that Sunjay learned to play at the age of seven! Like Hesitation Blues, there is minimal instrumental backing; the first minute and a half is Sunjay solo before drums and bass come in to support.

COME BACK BABY
Walter Davis wrote this and recorded it in 1940. A slow, heartfelt ballad. Bob (Fridzema) had the idea to play the Wurlitzer and it worked a treat. Sunjay singing in a talking blues style. Gentle and soulful.

FREIGHT TRAIN
A gentle ballad and the first finger-picking Blues song Sunjay learned to play on the guitar. “I watched Stefan Grossman’s VHS tapes on how to play Blues guitar on repeat when I was young. My dad loved Freight Train and the whole story surrounding Elizabeth Cotten. I think I took on this keen interest myself – though I can’t play it like she did (left-handed and upside down!)”. Gentle drums and bass accompany Sunjay’s warm vocals and finger-picking guitar.

DUST MY BROOM
A blues classic in every sense of the word. First recorded by Robert Johnson in 1936. Often played with a slide but the only slide here is Sunjay’s finger. He explains, “Recently I was asked what Dust My Broom means by a promoter. He’s been booking me regularly since I started in 2011. Knowing that he has vast musical knowledge, I assumed he was joking and trying to get me to trip up in front of a group of people. Turns out he wasn’t and genuinely didn’t know! Anyway, ‘Dust My Broom means…….”

THE EASY BLUES
Adapted from a Jelly Roll Morton piano piece called Jelly Roll Blues. Recorded live in one take. Shades of Sonny Terry and Brownee McGhee here as Sunjay and Lee jam out blues with a touch of country, this track is the perfect closer of the album but leaves you wanting more. Only three mics used to record this – a lo-fi production which is unlike anything else on the album. Shimmering hammer-ons and pull-offs as Sunjay slips and slides all over the guitar.