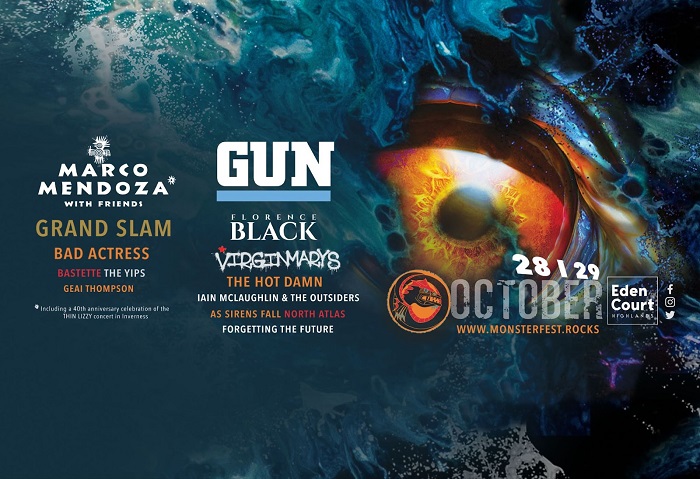 This autumn will see the welcome return of Monsterfest to Inverness, Scotland – where the River Ness meets the Moray Firth in the cultural capital of the Scottish Highlands. The star studded festival takes place at a new venue for 2022, Eden Court with international headliner Marco Mendoza and Friends with a special themed set and Scottish favourite hard rockers GUN to close the event.

A plethora of events and bands to please all tastes are planned leading up to and during the week of the festival – In-store at HMV Inverness appearances include: Young highland rockers Bad Actress October 1st and GUN October 18 respectively. Marco Mendoza plays in-store October 26 and the fast rising Mason Hill October 27, the band also headline The Fringe at Eden Court that night.

An intimate VIP dinner with Mendoza, who has recently released his new solo album ‘NewDirection’, plays an unplugged set and will talk about his own journey through music on Wednesday evening. Monsterfest has strong connections with the local community and seeks to give back, where during the day on Thursday an education day with speakers from different parts of the music industry with Marco closing talk. This will have around 50 local school students participating, all of whom keen to learn and grow and in partnership with Developing Young Workforce.

Friday has a real dip into the 80’s along with a celebration of over 40 years since rock royalty Thin Lizzy played a massive show in Inverness during the ‘Chinatown’ tour. Author Graeme Thomson (who originally hails from Inverness) presents a Q&A about his Phil Lynott book ‘Cowboy Song’, 16 year old prodigy Geai (pronounced Jay) Thompson will open with some guitar wizardry, then a collection of bands, some that tip their hat to the 1980’s, The aforementioned Bad Actress, Grand Slam and, of course, Marco Mendoza offering a split set of a celebration of the Thin Lizzy concert and then lashings of Marco’s latest album on display live

A more modern approach sees Saturday in with a line-up featuring local legends Iain McLaughlin and The Outsiders, the high energy and crowd-engaging The Hot Damn and spicy must-see properties at the moment, The Virginmarys and fresh from a European Tour as special guests to Steel Panther, the heavy and crowd rousing Florence Black. One of the best, if not the best Scottish rock bands of the last 30 years, GUN will close the festival. Buy your tickets now for what is set to be a highlight of the year for rock music fans.