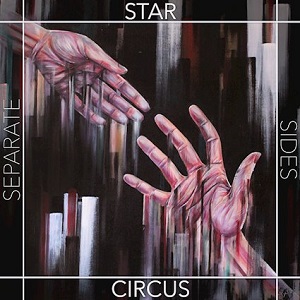 London based rock pop outfit, Star Circus, are set to reveal one of the year’s most surprising and pleasing rock albums of 2022. After making big impressions with a series of standout singles and go see live shows, the band have announced the release of their debut album, ‘Separate Sides‘, on the 2nd December and kick off the pre-order campaign with new single, ‘Bridges‘.

Star Circus is the brainchild of Dave Winkler (Bordello Rose, Renegade Playboys, Trophies of Man). After a detour playing guitar and touring as a hired gun for acts such as Bow Wow Wow, Johnny Lima and Ryan Hamilton, in late 2019 the band materialised out of Dave’s passion to create an album focused around his own material.

It wasn’t long before Winkler’s own songs started catching the attention of the music industry, including Total Rock and Radio One Rock Show legendary producer, Tony Wilson.

“Dave played me the demos and I was blown away by them – song after song crammed with catchy riffs and commercial hooks. I knew straight away that I’d love to work on this album and bring these fabulous songs to life.” – Tony Wilson

Alongside Tony handling production duties on ‘Separate Sides’, the debut album was mastered by Ade Emsley at Table of Tone Mastering (Iron Maiden/Alison Moyet/The Treatment); all of which adds to the potency of the song writing on offer here and equates to an euphoric collection of music that fans of melodic rock will enjoy over and over. Rock pop smarts? Check. You simply cannot miss the melodies, Winkler and co. have equipped themselves with great darts, and are taking aim.

From the infectious dark hooks of ‘Save Your Life‘, the melodic uplifting sonics of ‘Just Like In A Movie‘ and ‘Love Is The Enemy’, to the melancholic yet anthemic delivery of ‘Bridges‘, throughout this long player there’s a real sense Winkler’s true vision and inimitable style which gloriously celebrates the best of 70s/80s rock music. While the songs will sit comfortably with fans of classic style rock, Star Circus aren’t afraid to look at the here, now, and future of their musical direction. They’ve succeeded in delivering a body of work that truly makes this album their own.