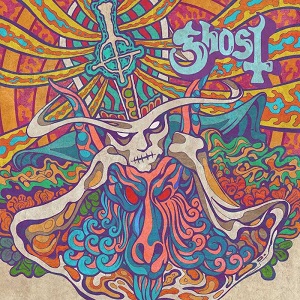 Following a colossal surge in streaming numbers across various media platforms, Ghost have shared their popular hit ‘Mary On A Cross‘. The song has been rapidly climbing through the UK official singles charts, hitting #33 in the UK singles charts and set to continue edging closer and closer to the top.

Ghost is a band that has always expertly used social media to build and engage a fanbase. Whether it’s long-standing webisode series, it’s elaborate graphic novel meets rock opera artwork or the epic music videos, Ghost puts out and the fans take it from there and go nuts. And they have grown into one of the biggest bands in the world, recently being cited by the Wall Street Journal as “The next generation of Arena Stars” alongside Bad Bunny, Billie Eilish, Tyler The Creator and Harry Styles. But the breakout success of ‘Mary On A Cross‘ represents the band finally crossing over into mainstream notoriety, introducing Ghost, their music and their story to an array of new fans worldwide. And the stats for the song are undeniable:

The result is the most ambitious and lyrically incisive entry in the Ghost canon: Over the course of ‘Impera‘s 12-song cycle, empires rise and fall, would-be messiahs ply their hype (financial and spiritual alike), prophecies are foretold as the skies fill with celestial bodies divine and man-made… All in all, the most current and topical Ghost subject matter to date is set against a hypnotic and darkly coloUrful melodic backdrop making IMPERA a listen like no other – yet unmistakably, quintessentially Ghost.

The band are currently on the US leg of their IMPERATOUR with support coming from Mastodon. See the full list of dates below.