Kicking off the night’s proceedings was South Wales singer/songwriter Laura Evans, accompanyed on the electric and acoustic guitar by Joe Coombs. We were treated to a set consisting of a healthy mixture of blues, country and Americana. Laura certainly can sing, with a beautiful rounded voice that together with Joe’s precise playing helped warm-up what was already a decent sized crowd. Laura’s debut album ‘State Of Mind‘ is set for release on July 1st. 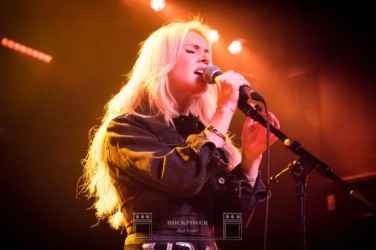 And so onto the main event. The return of Robert Jon & The Wreck to Nottingham, the band’s second visit to the city. Last time the band played to a packed out Bodega, so it was more than sensible to return to a larger venue. With the crowd now increased in size we were treated, and I do mean treated, to a fantastic foot-tapping evening of blues rock and southern rock. Us Brits have really taken to Robert Jon & The Wreck, something that was very much in evidence on the night.

There was a change of personel due to the bands keyboardist Steve Maggiora ‘slumming it’ on tour with Toto. Thankfully keyboards were in the safe and skilled hands of Bob Fridzema (ex King King, Sari Schorr) who slotted in perfectly. With excellent performances all round, it was a very enjoyable evening, ending on a superb encore that really showcased the individual talents of all the band members.