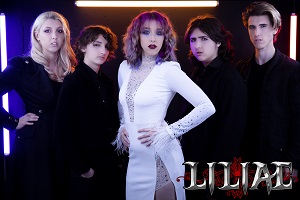 Liliac, the definitive rock sibling band, whose ages range from 14 to 23, is stoked to announce additional Moonlight 2022 tour dates. The robust schedule takes the five-member rock outfit to more than 40 U.S. markets, with a slew of dates still-to-be-announced. The hefty schedule has the group gigging in festivals, fairs, casinos, theatre and clubs.

Liliac, a band known for a distinctive ‘vamp metal’ sound gave audiences more reasons to rock during Season 15 of the NBC juggernaut “America’s Got Talent” with their rendition of ‘Piece of My Heart‘. Their original hit ‘We Are The Children‘ from their debut EP ‘Chain of Thorns‘ hit No. 1 on Amazon’s Rock Chart for New Releases and Best Sellers. ‘Queen of Hearts‘, featuring 13-original tracks, came out in 2020 and shot to No. 29 on iTunes Rock Charts. The female-fronted rockers have gone viral and accrued more than 100 million YouTube and Facebook views combined, seven million Spotify streams, more than 67,000 Instagram followers and climbing.

Their touring momentum is equally relentless. Liliac headlined two nights of sold-out concerts in Arizona, has performed on Kiss Kruise, Rockin’ the Rivers and Monsters on the Mountain Festivals. Liliac, The First Family of Rock, is Melody (vocals), Samuel (lead guitar), Abigail (drummer), Ethan (bass guitar) and Justin (keyboards). Liliac is based in Los Angeles, Calif.

May 12 | The Masquerade | Atlanta, Georgia

More dates to be announced soon.