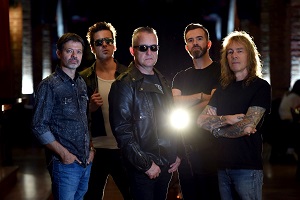 They can look back on eight released albums so far, and they already proved that they know how to rock! They even made it onto various soundtracks of different US TV series and movies, and opened for bands like Kiss, Motörhead, Def Leppard and many more in the past.

This year, Sideburn will celebrate their 25th anniversary and they will do so with their 9th studio album ‘Fired Up‘, which is scheduled to be released in summer 2022 on Massacre Records.