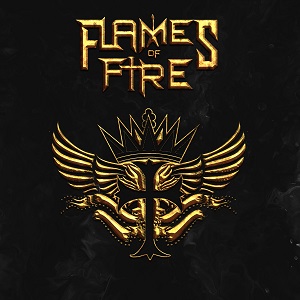 Scandinavian Christian Heavy Metal band Flames of Fire are set to release their self-titled debut, featuring musicians that have been a part of numerous other bands over the years.  Some people tend to get immediately turned off by the term “Christian Metal” but hear me out.  The problem with a lot of Christian rock bands is many end up professing their faith first and foremost, which is admirable, but then they try to promote their faith through music as a secondary extension of their beliefs.  The result is poor quality songs.  If you are going to create a band, the focus needs to be on the music, with the message conveyed by the strength of the songs.  Fortunately, Flames of Fire do Christian Metal right, in large part because all of the band members are seasoned musicians who cut their teeth in numerous bands.

The two band members who I am most familiar with are singer Christian Liljegren (of Narnia fame) and bassist Per Schelander (from House of Shakira).  Other members include guitarists Mats-Åke Andersson & Stephen Carlson, and Jani Stefanovic (guitars, keyboards, drums).

After a short intro, the album kicks off in spectacular fashion with my favorite track ‘Gloria’. It’s easy to see why this was released as the first single. It’s got an Iron Maiden feel to it, with the main melody riff hooking you and not letting go. Christian Liljegren’s vocals are as powerful as ever and fans of his past works will no doubt love this. The album continues to impress with the title track and my second favorite track ‘I Am’. Nothing groundbreaking, just very well done power metal-type sonics by a band that understands the best aspects of the genre and incorporated their shared history to create music that works.

While there are a few more tracks that continue to impress, the album unfortunately begins to lose steam towards the end. The second to last track ‘Solution’ is a nearly 10-minute mid-tempo song that plods along for at least four minutes longer than it needs to. It reminds me of all of the songs from Axel Rudi Pell that I skip over because they are too long and overstayed their welcome. Those last 4 minutes are completely uneventful and quickly become redundant.  Perhaps it’s because the song is so long, but I found the Christian messaging to be heavy-handed on this track. It ends up bringing the album to a screeching halt.

Another critique that listeners should be aware of is the number of songs featured on the release. I hate when bands do this, but the band lists 9 tracks on this release.  In reality, there are only 7 songs. Track 1 is an intro, track 9 is an outro, and both are less than 2 minutes long.

Based on those critiques, you have to decide if it’s worth it to buy the album or just individual songs. There are great tracks on here, but the question you have to ask yourself is, are 6 good tracks a worthy album purchase? To be clear, those 6 songs are worth owning. I just wish the band could have thrown in a few more songs, especially when they sound as good as the ones featured here.  You don’t have to be Christian to enjoy great Christian metal, especially when it’s played as well as it is here.  Don’t hesitate to check them out.