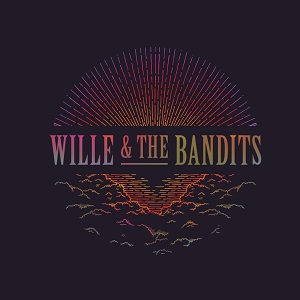 The first single ‘Will We Ever‘ is released Friday November 5 and can be streamed from here.

This is about an album that documents a time when the world stood still, recorded in a place only accessible on the high tide, on the banks of the river Fowey; one of Britain’s most iconic recording studios that is coming to the end of an influential life. This could be the last album recorded at Sawmills, funded by the fans of a band considered one of the most exciting and successful independent acts in Europe,

It is no exaggeration to state that Sawmills Studio, with the artistry of John Cornfield, has produced some of the most ground-breaking albums of the last 30 years; Stone Roses’ Fools Gold, Oasis’ Definitely Maybe, Supergrass’ In It For The Money, Robert Plant’s The Fate of Nations, Muse’s Showbiz, and now Wille & The Bandits’ ‘When the World Stood Still‘ stands alongside as one of equal mastery.

Wille & The Bandits are a band who do not stop pushing boundaries. They were in the process of carving out a reputation as one of the UKs most original acts when the impacts of the pandemic led to a cease of touring. Wille and the Band got stuck into song-writing and an album was written; A group of powerful anthemic songs, who’s melodies and lyrics resonate with the emotions of a time that none of us expected.

“It had always been a dream for me to record at Sawmills”, says Wille Edwards, the band’s lead singer, guitarist, and multi-instrumentalist. “I was devastated at the thought that another piece of music history was being repurposed away from a place of inspiration for the arts”.

“However”, continues Wille, “there was a suggestion of fate when a friend took me night fishing at a secret spot, that just happened to be in the Foy River, looking across to this wonderfully situated building; one that we all know, even if we don’t realise it, from a childhood of reading Wind in the Willows. This set me on a hunt to find out if there was still a chance to record one last album at Sawmills with the man behind all the iconic albums recorded there – Mr John Cornfield. To fund this enterprise, we turned to our unbelievable fans who made the dream happen, and who we are eternally grateful, too”.

Wille & The Bandits have so far recorded five studio albums to critical acclaim and are credited with pushing the boundaries of roots rock into a new era of music lovers. They were listed in the top ten must see bands at Glastonbury Festival by BBC Radio One and were personally invited to perform on the German TV show Rockpalast – a musical institution of global import.

They have played festivals across the world, from Broadway to the West End, and Belgrade to Sydney.  They were picked to perform at the London Olympics after being voted one of UK’s best live acts.

The first single from the album, ‘Will We Ever‘, features Wille’s signature slide guitar playing and powerful vocals. It mourns the loss of performing as a band, and asks the question; will the world ever be the same?

The combination of one of the country’s best live bands, best producer and iconic recording studios has produced something very special with the forthcoming release of ‘When The World Stood Still‘.

Caught In The Middle
This track moves through three distinct genres, mixing hip-hop, folk and rock. Lyrically, it addresses the political turmoil and lack of identity the UK faces as it tries to re-establish itself as a global player. It features an almost Rage Against the Machine guitar riff, washed out with fuzz and octave dirt, mixed with harmonic slide lines which mimic analogue hip hop synth parts. If one song gets close to capturing the band’s genre-straddling sound, this is the one.

I’m Alive
The song is from the perspective of someone struggling with depression, who experiences a moment of epiphany which breaks the cycle of depression and who learns what it means to be alive. The song features a huge instrumental section, hinting at more eastern influences, with the use of percussion and exotic scales. The band shows what fantastic singers they all are with a three-way vocal harmony section in the chorus, reminiscent of The Eagles and a more southern rock approach.

Without You
Without You is a dark epic ballad which swirls from Stairway to Heaven to Pink Floyd in its musical approach, with a soundscape that wouldn’t be lost on a Tom Waits or Nick Cave record. The lyrics are very much inspired by the loss of a loved one, experienced by too many in this pandemic. Wille’s guitar solo features his signature slide sound soaring like David Gilmore’s, while the band transports the listener into another world. The vocal was done in one take, straight the way through. You can hear the pain and suffering in Wille’s delivery as he screams himself almost hoarse at the end.

Good Stuff
A feel-good song with a hypnotic groove and anthemic sing along chorus. The song features Wille on bottleneck slide and grooves almost like an ACDC track with a huge chorus that will get all the WATB fans singing back on the album’s tour. The song asks “What makes you happy? What’s your good stuff?”

In This Together
One of the most used phrases of the pandemic; We’re in this together. This track explores how divisive politics and social media fuel a culture of conflict and blame. The song is an up-tempo track which has shades of Tom Petty and a slight tilt towards 90’s Brit Pop.

Will We Ever
The band lament over whether they will ever sing on a stage again or return to normal pre-covid time of musical performance. The track almost has a southern rock edge with Wille playing dobro and lap steel as the main guitar, followed by a three-way harmony vocal chorus which has shades of The Allman Brothers.

When The World Stood Still
The title track of the album shows s gentler side of the band with Tom on brushes and percussion, Harry on double bass, Matt on Piano and Wille weaving in and out with his beautiful dobro playing. The song showcases Wille’s vocals at the forefront of the song which stands out as one of his best vocal performances to date. Lyrically, the song talks about the beauty experienced by some, of those first few weeks of the lockdown when nature almost took the world back and the common noises of the hustle and bustle lifted to create a stillness and tranquillity.

Move Too Fast
Move Too Fast really showcases the musicianship in the band with an almost New York funk-soul vibe running through the song with shades of Little Feat. The guitar solo is clearly inspired by Derek Trucks with the guitar imitating a human voice and the vocals using hip-hop phrasing to create a feel-good atmosphere. The song is about how people need to slow down and reflect on what is important in life and listen to their inner soul rather than external influences.

Broken Words
The stuttering chorus imitates the ineloquent and unclear statements released from the podium by our Prime Minister throughout the pandemic. The song has an almost funk edge to it, featuring a percussion break out from Tom Gilkes which uses any kitchen utensils and random objects (such as a bird house), that were at his disposal at the time of recording.

Daylight
Daylight is a song about Wille’s second daughter, who’s forceful nature and delightful exuberance bring him such joy (His first daughter had a song on the previous album written about her, so this isn’t favouritism). Don’t expect a soppy track because this one features a huge riff which breaks down into an almost Led Zeppelin type middle eight with thunderous Bonham drums and screaming vocals.

Refuge
A refuge is what music is to many people; a life raft which keeps us safe. The song talks about how musicians have been disrespected and disregarded during in the pandemic. At no point has there been consideration that art is a valuable commodity in society. This frustration has been translated into an ethereal, driving melody that shows the influence of Bruce Springsteen and War on Drugs.

Solid Ground
A beautiful song which has shades of John Martyn about it. The song focuses on the problems that our children will have with the “code red” warnings for humanity. It is a plea for our children to be able to walk on solid ground. Its features a guitar solo which weeps and howls as if Peter Green has been transported back to planet earth.

on all dates *except