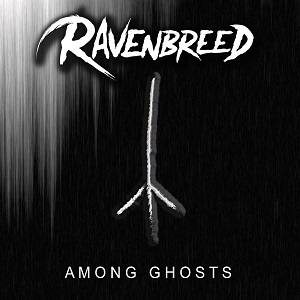 Cardiff high flying, rising rockers Ravenbreed are back with a new single and a brand new line up! With original members Mikey Watkins and Ross Formosa now joined by the impressive vocals of Luke Short and the awesome drumming of Aggy Nowicka, the new incarnation of Ravenbreed are delighted to announce their first piece of new music.

A brand new Ravenbreed single is coming everyone’s way on October 29th. It’s called ‘Among Ghosts‘, and it is set to be one of the rock earworms of the Autumn. Abandon any thoughts of your traditional Halloween playlists, all you will need come October 29th is ‘Among Ghosts‘! With it’s winding intro, huge chorus and ripping guitar solo, ‘Among Ghosts‘ is everything a modern rock song should be in 2021.

‘Among Ghosts‘ can be pre-saved on your streaming platform of choice: Here.

The next chance to see Ravenbreed live in the flesh is on the 1st of October. They’ll be supporting Gin Annie and Scarlet Rebels at Hangar 18 in Swansea. Full information about the show including ticket information can be found: Here. Those lucky enough to have tickets might just get to hear ‘Among Ghosts ‘played a few weeks before its release!

Ravenbreed are a four piece hard rock band from Cardiff, South Wales, UK.  Their modern, hard hitting blend of melodic and punchy music has attracted a loyal fanbase and seen them feature on many festival line ups including Redemption Festival, Ice Breaker, Loverocks Festival, Breaking Bands Festival and Hard Rock Hell 13 amongst others.

Original members Mikey Watkins and Ross Formosa joined forces with vocalist Luke Short and drummer Aggy Nowicka to form the current line up following the release of their latest EP ‘Echoes‘ in February 2021. The release gained critical acclaim from BBC Wales, numerous radio stations and the wider music industry and the lead track ‘Echoes’ is the band’s biggest release to date with over 40k streams on Spotify alone.

With this new single due at the end of October and plans for a new EP in the coming months, Ravenbreed are set to build on their success…all that’s left to say is … Ravenbreed are comin’ with attitude, so look the f*#k out!