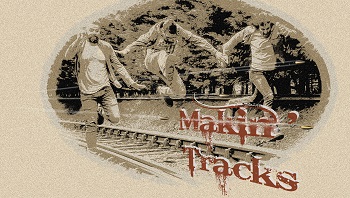 Finally……..South-Coast based country rockers The Outlaw Orchestra release the first single ‘Done My Time’ and accompanying video, from the upcoming 2nd studio album ‘Makin’ Tracks‘ featuring over one hundred of their outlaw following!

The band ran an exclusive pre- order in advance of the album release where fans from all over the world returned their own police mugshot photo whilst wearing a limited edition inmate Outlaw Orchestra t-shirt.

The mugshots will be featured on the vinyl artwork and every returned mugshot is featured in the new video release.

As singer/guitar player Dave Roux explains “We’ve never thought of them as fans – they are fellow Outlaws – and fellow fans of music, our buddies on the road – and so we wanted to get everyone involved in this record, so it only seemed right that all the Outlaw mugshots should also feature in the video for the first single from the new album.”

‘Done My Time‘ is available on all digital platforms on the 10th September and gives a window into the quality that we can expect from the hotly-anticipated 2nd studio album from the rebels of the UK rock and country scenes.