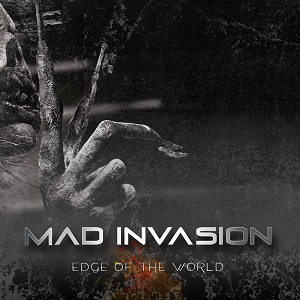 In September Mad Invasion release their long-awaited debut album entitled ’Edge Of The World‘, an album that offers a wide range of heavy songs with bone crushing guitars, airy keyboards, and a dynamic rhythmsection – adding the final touches to the very distinct Mad Invasion sound. The three first videos also feature special guest Mikkey Dee from Motörhead and Scorpions. Join the Mad Invasion journey and rediscover the golden age of rock – in a new suit of armour.

About the song and video:
Welcome to the ’Edge Of The World’…
Picture yourself somewhere in the Middle-East or North Africa… walking around in one of the markets, through narrow passages… with merchants, beggars and thieves all around… the air filled with smells of spices, incense and animals. A cool and mysterious setting for a dark mystery that reminds us of the backdrops used in epic films like ’Death On The Nile’ and ’Indiana Jones’. ‘Edge Of The World‘ delivers a fusion of bone-crushing guitar riffs and a led-heavy rhythm section, all mixed with multi-ethnical instrumentation and harmonies typical for the regions.

The guitars build on a mono-toned lead riff in the intro and chorus and open-ended chords in the verse and pre-chorus. It is only in the bridge that the more typical duo-harmony riffs are used. The guitars are also tuned in drop B (5 tones down) to give a deeper and darker feel to the sound. The ambiance of the song is also inspired by Led Zeppelin’s song ’Kashmir’ and Rush’s ’A Passage To Bankok’. Packaged in Mad Invasion’s typical dark-themed classic rock, the result is both different and enticing – clearly standing out on the contemporary rock scene.

‘Edge Of The World‘ is single is the title track from the upcoming album and is also the ‘big’ song both as far as energy, intensity and delivery.