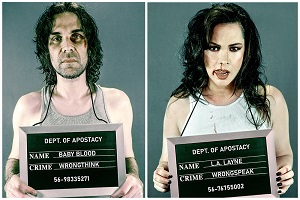 Rock duo The Bloody Nerve (Stacey Blood and Laurie Ann Layne) may be Nashville-based, but you’d never guess it from their menacing sound, incisive edge and the dystopia-challenging themes of their work, such as their latest single ‘Roads’ with its hard-hitting accompanying video. It’s a song with a huge sound that hits with much clout and shiv-sharp edge.

‘Roads’ is the latest episode from The Bloody Nerve’s powerhouse rock concept album ‘All Blood, No Treasure’. Unlike most albums, ‘All Blood, No Treasure’ isn’t being released all at once. Instead, the band chose to release it in phased instalments, episode-by-episode, building up tension and anticipation over time: single-by-single, part-by-part. Each single release carries its own standalone meaning and feel, but the individual tracks build up a broader, interconnected, work of art, with a message that both overarches the parts and is woven through them.

‘All Blood, No Treasure’ isn’t just an album, it’s an unfolding work of art and a mosaic that will build up over several months, each part having its own music and meaning, adding to the overall work.”

As vocalist Laurie Ann Layne explains, “The album is broken up into four ‘Acts’, with Act I concluding with ‘Roads’.  There will be a limited-edition CD available on the street date for each of the acts, with a full-length CD and dope vinyl when it’s over.”

‘Roads’ concludes Act I of ‘All Blood, No Treasure’, following ‘A Million Arms’ and ‘What’s It Say? (About You)’.

“A lot of the album was written over a few years but some of it very recently with ‘Roads‘ being right before the ‘pandemic’. ‘‘Clean up, you’re contagious,” right?  Coming from November of 2019, that’s been a pretty spooky lyric lying around.  I mean that seriously! The song is about the culture wars of the 21st Century, but who knew an actual contagion would be flashing shades of that in our world just a few months later?  Yeah, pretty spooky.”

‘Roads’ is an exciting, anarchic aural assault right from the outset. It’s a big sound and soundscape, within which Laurie delivers a manifesto, a creed, and an uncompromising call to arms, first proclaimed — with the feel of a radio broadcast — at the mic: “From this day forward, we give our devotion to the weak and the obscene, to the sick and the shiftless…”  before she goes on to brandish a red, white and black megaphone and calls out through the colourful cone, with Stacey responding, roused to action in shots that echo the ‘phone’s colours and swirls, amidst some striking imagery that’s not for the faint-hearted. A surprise comes in the mystical refrains in the song, with soaring guitars and Laurie transformed into an avatar of light, with another message.

Check out the first act finale of ‘All Blood, No Treasure’, OUT NOW, on all digital platforms plus the limited edition of Act 1 CD’s