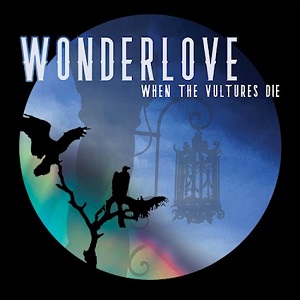 There was a time when the award winning band Wonderlove was a celebrated act in Southern California, seemingly poised to break out. But instead, their lives leapt forward to 2020, a year that brought them closer together than ever before – musically at least, since they were spread out over three states. The upcoming album ‘All of the Nightmares‘ from Wonderlove is the opening of a capsule from an alternate timeline and seeing what time in isolation has created.

Wonderlove’s style has always been grounded in rock ‘n roll, while also encompassing many of the influences and offshoots: psychedelic, progressive, gospel, R&B – all of these are welcome. The tight interaction of Dicki Fliszar (drums) and Dave Beste (bass, classical guitar) gives the foundation for the wall of sound generated by Jesse Nason (keys), Bryan McIntyre (guitar), and Chris Paul Overall (vocals). Their first album, ‘Getting Off the Revolution‘, captured this lineup in their nascent form, with the last song on the album being the only one the band had rehearsed before recording. They quickly began working on their second album, ‘My Submarine‘, which featured intense arrangements honed from live performances. This album also brought them attention from the larger rock music scene, garnering them 4 music awards, a hit radio single and gushing praise from critics and fans alike. But then, quite unexpectedly, it was over.

Out of the confusion of 2020, technology brought the 5 members of Wonderlove back together to start work on what would become ‘All of the Nightmares‘. The idea came from Dave who simply said during a video meeting, “We should record a couple songs.” Using friends’ studios in Southern California to record drums and personal bedroom studios to record the rest, ten songs had taken shape by early 2021. The new album picks up where the band left off as if no time had passed with riff rock barn burners like ‘Dark Harvest‘, ‘On & On‘, and ‘Spider Queen‘, softer melodic songs like ‘Rain Fall Down‘ and ‘The Burden‘, and cinematic soundscapes heard in ‘Linger‘ and ‘Snake Charmer‘. Funnily enough, the new album also combines some of the circumstances from the first album: the band never played these songs before recording. However, without the burden of the studio clock ticking away, they could perfect their intense arrangements into something with far more depth than what was previously possible.

In this way, the lead single and video, ‘When the Vultures Die‘ (available 08/06/21) is the perfect introduction to an explosive and complex new album. The single showcases Overall’s soaring vocals over a thunderous drum and guitar groove. It is accented by a distorted keyboard overture and classical guitar chorus, and reaches a bass and drum climax before the final chorus. These dynamic shifts foreshadow the sonic roller coaster themed throughout the album.

Wonderlove’s commitment and attention to creative detail is transmitted loud and clear in the video for “Vultures”, which was directed by Jesse with artwork overseen by Bryan. It is evident that they are pulling no punches and continue to generate music and art that is second to none. With the album prepped for release in October 2021, the band still spans three states but clearly
demonstrates they have something to say collectively. In the alternate universe in which Wonderlove now exists, they are still a force to be reckoned with.