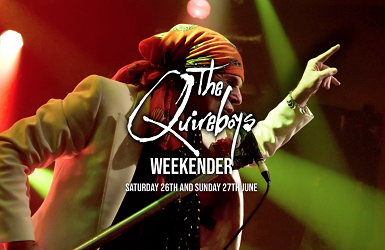 After an impressive run of critically acclaimed, career-best albums in recent years, The Quireboys have gone back to the beginning. In recent weeks, they have been in the studio re-recording a brand-new, 30th anniversary version of their chart-topping debut album ‘A Bit Of What You Fancy’.

We too are going back to our beginnings with The Quireboys this coming weekend. For the first and only time, the complete Great Music Stories interview archive with the band will be unleashed in one sitting this coming weekend. Too much content for a day, it’s become a mammoth two-day run – rolling 10am til 10pm on both Saturday and Sunday.

Guy B from Great Music Stories says “Brave, mad, exciting, overkill – call this radio project what you will, but there have been requests for some time to re-air some of our feature interview hours with the band; and I thought if we’re going to do it we’ll do it properly and put everything out again!

The Quireboys were our first ever Band of the Year back in December 2015 and they are the only band to have had three Album of the Month reviews – four, if you include Spike’s ‘Late Night Song Book’. On the Friday radio show, the band has been one of the most requested bands for years.

Our interviews with The Quireboys chart their many successes since 2015, their albums, their new departures and much of their work outside the band. There’s a warmth and character to many of the interviews that comes from experience, knowing the band and how to make them comfortable and capture them at their natural best.”

The weekend special will air all-day Saturday and Sunday only on greatmusicstories.com

Schedule updates during the weekend on Twitter @GuyB_rockshow – plus a weekend preview on my weekly Friday Rockshow after 5pm on Friday.