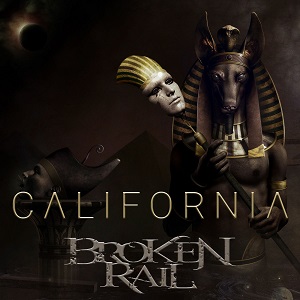 BrokenRail have released the Official video for ‘California, taken from the band’s full-length album ‘Beautiful Chaos‘.

‘Beautiful Chaos‘ is available on CD, Vinyl & Digital! Here, or listen to ‘California‘ as well as the entire album on Spotify: Spotify

Roaring onto the global music scene on a tank full of raw rock energy and fierce metal bravado; BrokenRail are an award-winning hard rock and metal band hailing from Birmingham, Alabama. Since 2008 they have been bringing their infectious, heavy-hitting anthems to the worldwide stage — growing them a steady following across the globe.

The band’s debut release, a significant deviation from the band’s current direction, ‘Welcome To The Escape‘ came out in 2010 and made a strong impact for BrokenRail’s inception. The EP was produced by Ben Trexel & Rick Beato (Shinedown, Crossfade). The band toured extensively throughout the Southern Regions before getting back into the studio in 2011 to complete their debut album, a culmination of all the band’s recorded material to date at the time. BrokenRail teamed up with producer & engineer Brett Hestla (Framing Hanley) to add three new songs and in December that year, the debut album ‘Never The Same (Then and Now Edition)‘ was released into the world.

In 2013, the band released the single ‘When You Fall‘ before ultimately heading to Los Angeles to work with producer Joseph McQueen (As I Lay Dying, Bad Wolves) on their new sophomore record. The final mixes were then sent to Kane Churko (Papa Roach, As Lions, Bad Wolves) & Logan Mader (Gojira, Bullet For My Valentine) in Las Vegas.

In November of 2016, BrokenRail released a 3 track EP based off the upcoming album simply titled ‘BrokenRail‘ which was the first hint of the band’s new heavier direction. They released a music video for the single ‘Walk Again‘ which has attained tremendous responses from both fans and press.

In May of 2018, BrokenRail premiered a new, even heavier direction exclusively through Loudwire with their single release ‘Ghosts of Tomorrow‘. Impacting radio worldwide, the song was added to Spotify’s Official ‘New Metal Tracks’ Playlist to over 304K followers as well as top 10 placement on ‘Hard Rock Workout’ to over 65K. Multiple songs from their previous EP still were on rotation on many Spotify Official playlists including ‘Heavy Metal’ & ‘Metal Gym Hours’.

BrokenRail released their sophomore album ‘Til Death Do Us Part: The California Vault’ on October 30th, 2018. The band decided to release the once shelved album as a gift to their fans to celebrate their 10 Year Anniversary. This album has been received very successfully and is has now garnished over 6 Million streams on Spotify and over 30 Million views through user created content on Youtube. This success led to BrokenRail developing a strong relationship with their now manager based in the UK and helped the band acquire a worldwide record deal they signed with Cleopatra Records out of Los Angeles, California in late 2019.

BrokenRail has toured extensively across the US on multiple national tours and built a large hometown following in the state of Alabama. The band has been on the National “Screaming Black Curse Tour” supporting All Hail the Yeti & Invidia in 2017. BrokenRail also supported the National “Little Monsters Tour” with Raven Black & Aboleth. The band performed at the 25th anniversary of Rock Fest in Cadott, WI in 2018 alongside bands such as Disturbed, Godsmack, Sevendust, A Day To Remember, Trivium, & more. In December that same year, BrokenRail supported In Flames & From Ashes To New in their hometown Birmingham, AL.

In early 2020, BrokenRail travelled back to LA to begin work on their first release under the new label and 3rd studio album with longtime producer and friend Joseph McQueen (As I Lay Dying, Bad Wolves, Upon A Burning Body). The album entitled ‘Beautiful Chaos’ released on November 13th, 2020 available across all platforms through Cleopatra Records. The band has released singles ‘Creatures’ & ‘Demon in Disguise’ thus far both with official music videos. BrokenRail also released ‘The Hate’ alongside an official music video as a one-off single while the band awaited their album release during the lockdowns due to the global pandemic.