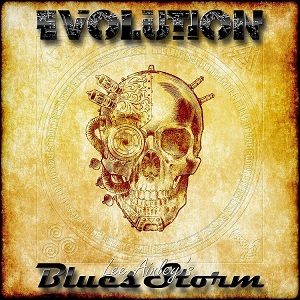 Hailing from Sussex, UK contemporary blues rockers Lee Ainley’s Blues Storm are happy to announce the signing of a deal with Epictronic for the release of their debut album ‘Evolution‘.

“Who knew that a rave review of our album ‘Evolution‘ would lead to an opportunity to work with a global distributor. Lee Ainley’s Blues Storm are proud to announce that they have signed a worldwide distribution deal with Epictronic for their album ‘Evolution‘. We are ecstatic to be able to confirm this news and as we continue with our song-writing and live performances, we are confident that this deal will lead us forward to a very exciting future.”

2.I’ve Got Mine (Now Pull The Trigger)

Fronted by an unusual pairing of mother/daughter, this musical powerhouse brings you original tracks with sounds firmly rooted in blues history.

The unique vocal pairing of Lee Ainley and Tori Mai Hobbs-Ainley showcases tight harmonies wrought from close family bonds and a solid musical pedigree from both the maternal and paternal lines. Lee and Tori Mai are fearless warriors of music, they delve into the substrata of deep rock with gritty vocals and deliver pure gold. They employ complex and beautiful harmonies that, whilst utterly different, blend together seamlessly.

This band hailing from Sussex, UK, has a supreme skill set which reflects in the polished fullness of the songs. These are built up with each member delivering their parts as inspiration hits. Lee and Tori Mai provide song writing artistry with the melody,harmonies and life-inspired lyrics. The muscle is layered on by Dave Moss on lead guitar, combining his blues rock guitar riffs with influences from other genres and styles that add to his creativity. The heart starts beating with patriarch Nat on bass and piano, Nat is no stranger to writing stunning songs. Dave on drums provides the rhythm of the heart and builds decoration within the songs that not only lifts them but also gives them colour and breath. Their new album ‘Evolution‘, recorded in January 2020 and was set for UK release on 21st February 2020, with a full line up of UK festivals and shows booked to promote it; only to be interrupted by the Covid 19 pandemic and the complete lockdown of the UK. However, the album is set to be released worldwide Spring 2021 and will join their growing catalogue of recorded material. This first full album of original material follows on from the successes of their first two EPs, ‘Shoot Me Down‘ and ‘Bankruptcy‘, which received a phenomenal media response and significant national and international play on UK FM radio stations and other platforms.