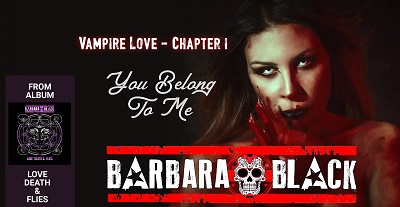 Barbara Black has released an Official lyric video for the track ‘Vampire Love, Chapter I: You Belong To Me‘.

‘Vampire Love, Chapter I: You Belong To Me‘ is taken from the album ‘Love, Death & Flies‘, which is the third album by Barbara Black, a singer and a band born to rock.

The new album ‘Love, Death & Flies‘ is her hardest  sound that shows the lyrical influences of Poe, Bécquer and the horror cinema of the 80s. Victorian streets, dark passages and a decadent romanticism drives you to reach the zenith in ‘Damnified‘, a reflection of the band’s approach to wilder southern sounds. You will find one of the most powerful and quality voices that flies through melodies, screaming and opera as well as sharp guitars and a devastating drum.