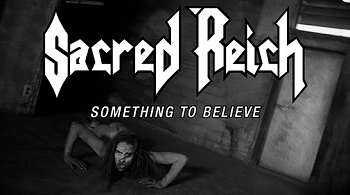 Last year, Sacred Reich released their first record in twenty three years: ‘Awakening‘. Now, the band has launched a new video for the album track, ‘Something to Believe‘.

Sacred Reich comments: “With the uncertainty that we are all experiencing, we think it’s time for ‘Something To Believe‘”

Awakening showcases everything a fan would expect and hope for from the Phoenix, Arizona unit: a timeless collection comprised of blistering thrash, crushing grooves, meticulous solos, and socially conscious lyrics. The return of Dave McClain, who manned the drum throne from 1991 to 1997, and the addition of twenty-two-year old guitarist Joey Radziwill, alongside original members guitarist Wiley Arnett and vocalist/bassist Phil Rind, are integral facets of the record. ‘Awakening‘ was produced by Arthur Rizk (Power Trip, Cavalera Conspiracy), engineered by John Aquilino, and mastered by Maor Appelbaum (Faith No More, Halford, Armored Saint).