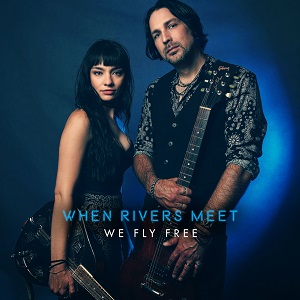 British husband and wife blues rock duo When Rivers Meet announce their debut album ‘We Fly Free’ will be released on Friday 20th  November 2020. The first single ‘Battleground‘ has just been released and is available: Here

Grace and Aaron Bond release their self-penned album ‘We Fly Free’ following their critically acclaimed EP’s ‘The Uprising’ and ‘Innocence of Youth’.

Their  passion  for  blues  rock  shows through  with  an  underpinning  of traditional blues and classic rock. The duo have made a concerted effort to keep to a genuine,  gritty  sound  using  authentic techniques, including tube tape echo and reverb chambers, which have created a live sound that keeps a truly vintage vibe that not only has energy but is also a true representation of the ever evolving sound this duo produces.

WRM show great delight that a Hammond organ has been introduced into some of the tracks on this album. This classic blues rock feel will transport you back in time while also inducing a contemporary When Rivers Meet twist.

Grace sings lead vocal on most of the album,  and  showcases  her  impressive range, whilst adding distinctive slide resonator mandolin and fiddle. As well as guitar, Aaron adds rich vocals that root the songs in harmony (taking lead on ‘Breaker Of Chains’ and ‘Take Me To The River’).

Recorded with Adam Bowers at The Boathouse Studio in the Suffolk countryside, it’s the perfect place to concentrate on recording with no interruptions, although you may hear the odd bird song captured in the open-plan recording space. Adam also plays drums and shares base and keys duty with Robin Breeze on some of the tracks, giving a rich depth and creating wall of sound.

“We’re so excited about this record” says Grace. “Our two previous EP releases have really given us such a good foundation and helped us to find our sound. When we came to record the album, we/new exactly what we wanted to create.”

“The album is titled ‘We Fly Free’, which is indicative of where we are right now. We feel we’ve grown so much in this last year as people and as a couple: it’s really given us the confidence to write with freedom.”

Released under their own record label: One Road Records

Since launching onto the Blues scene with their debut record ‘The Uprising EP’ in April 2019, Grace and Aaron have been going from strength to strength. The British husband and wife duo have an ever-growing online fan base and‘ave gained the attention of Cerys Matthews’ The Blues Show on BBC Radio 2 .

Their follow up EP ‘Innocence Of Youth’ was released in May 2020 and with the release of their debut full-length studio album scheduled for release in November 2020.

Before lockdown, the duo toured the UK in their self-converted VW camper with an impressive tour schedule. Since the lockdown, the duo organised ‘Rockin’ The Lockdown’ – weekly Facebook live streams, attracting hundreds of thousands of viewers.