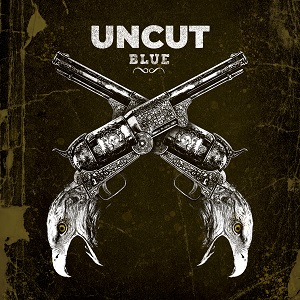 Vocalist / baritone guitarist Alexy Sertillange commented “It’s a great pleasure to announce our first album release, ‘Blue‘, on 6th of November with new video ‘Family Blues ‘. We had so much fun making this short movie with the very talented Julien Philips as a director. This album release is the achievement of a two-year project, and we can not wait to perform all of the Blue songs on stage soon.“

UNCUT have deep roots deep in the origins of American rock. The self-produced band from Poitiers were formed in 2016 by Alexy Sertillange (vocals/baritone guitar), Enzo Alfano (guitar) and Pablo Fathi (drums).

Their music is a masterful blend of rock aggression and blues riffs, propelled by wild and stylish drums.

The power of their songs is magnified through the group’s live performances, trapped in a gleaming trance, reminiscent of the golden age of Hendrix’s sensual rock. The natural son of Deep Purple, Clutch and Led Zeppelin, UNCUT take you on a trip through the vibrant land of rock music.

But where others my rush into the breach for a moment, UNCUT lay the foundations for lasting potential, with the grain of the glory days of the early 70s, combined with the spice of the best memories of 90s rock.