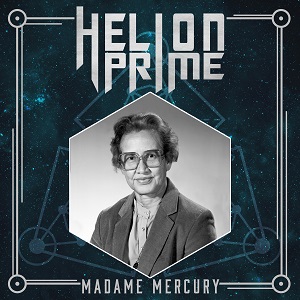 Today Helion Prime releases the second single for their upcoming album ‘Question Everything‘ out October 5th, 2020.

The single ‘Madame Mercury‘ is based on NASA Mathematician Katherine Johnson. Johnson studied how to use geometry for space travel. She figured out the paths for the spacecraft to orbit (go around) Earth and to land on the Moon. NASA used Johnson’s maths, and it worked! NASA sent astronauts into orbit around Earth. Later, her maths helped send astronauts to the Moon and back. NASA could not have done these things without Katherine Johnson and her love for maths!

Today would have been Johnson’s 102nd birthday had she not passed away earlier this year. There was no better way to release this song than with a video honoring her life’s achievements on her birthday!

“When researching everyone for this album each story was inspiring in their own way, but Katherine’s was one that really spoke to me. I admit I didn’t know much about her before starting this album, but I can confidently say after learning all I did about her she’s definitely a hero of mine. She was an amazing person and I hope this song can in some small way honor everything she’s done.”

It’s been about two years since the band’s sophomore release ‘Terror of the Cybernetic Space Monster‘ and Sacramento sci-fi power metallers Helion Prime returns with their third effort and the much shorter title ‘Question Everything‘ set for release on Monday, October 5th, 2020 via their label Saibot Reigns.  This is Helion Prime‘s first album with new vocalist Mary Zimmer, who has also accompanied the band on two separate tours of the United States. It also sees the band’s original singer, Heather Michele, returning in a writing capacity and contributing all lyrics and melodies. Heather Michele also along with other former Helion Prime vocalist Sozos Michael and with John Yelland (Judicator/Dire Peril) add their guest vocals on the full length.

The highly anticipated third record is a concept album, with each song revolving around different figures throughout human history that had the courage to question the status quo of their respective worlds/societies, in some cases even dealing with harsh persecution as a result. Those Helion Prime chose to write about-faced prejudice, mockery, ex-communication, and persecution – yet through it all, they held true to their beliefs and ideas. Time would be their greatest ally as their ideas and identities were eventually validated, oftentimes not until after their passing. They serve as an inspiration for all minds to continue thinking outside the box and staying true to themselves.

Jason speaks on the album itself:

“This album has truly been amazing to work on. The idea behind it is something I’ve been holding on to since around the time I started the band. Aside from writing some of what I consider to be Prime’s best work it was a great experience getting to work with Heather again on an album as she once again contributed her talents for the lyrics.”

‘Question Everything‘ was produced by Jason Ashcraft and Alex Nasla. Mixing was done by Chris Collier and mastered by Brett Caldas-Lima along with additional mixing/drum edits/reamping plus writing and performance of keyboard arrangements by Alex Nasla of Gear Gods Studio. Guitar/Bass edits by Michael Goodrich and cover art by Marc Whisnant.

“Question Everything” is out worldwide on October 5th, 2020 via Saibot Reigns. Album pre-order at Helionprimemetal.com