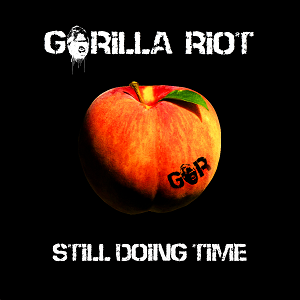 Fans can pre-save and pre-add the single to their streaming accounts: Here

‘Still Doing Time‘ is taken from their first full-length album, ‘PEACH‘, which was released just before the Covid-19 UK lockdown on 31 Jan 2020.

‘PEACH‘ is available in Digital, CD and Vinyl formats and released through Off Yer Rocka Recordings (OYR) with distribution via Cargo Records. It can also be ordered direct from www.gorillariotband.com

GR frontman, Arjun Bhishma, said, “I wrote this right at the end of the pre-production process of Peach. It stuck and so we added it into rehearsals with just a couple of weeks to go before we went into the studio.

I stumbled across the riff whilst messing around in open-G tuning, and the verse riff followed on immediately and naturally, with a simple mix of a blues hook and an AC/DC style stomper. I wanted to give the song a different texture and dynamic to the rest of the album, so I dropped the chorus leaving just the bare bones of the chords. In essence, it’s a pop chorus.

The song is more radio-friendly than some of the rest of our material. At under 4 minutes, it’s one of our shortest songs, but we felt that there was no need to add extra fat to the song. I feel that its concise, punchy, and hopefully leaves you wanting more.”

Equally at home acoustically or electrically they toured extensively last year with shows in Spain and France, and then across the UK with Australian rockers, Massive before ending the year on the Planet Rock Roadstars tour, with Piston and Hannah Wicklund. They performed a sold-out album launch show at Rebellion in Manchester in February this year but were then forced to cancel their album tour due to the virus pandemic.

Along with the release of ‘PEACH‘, Gorillia Riot had their song, ‘Bad Son‘, included on the vinyl chart-topping ‘Earache presents New Wave Of Rock N Roll‘ compilation album.

They have a headline tour of Spain planned for October just as venues open up to the public.