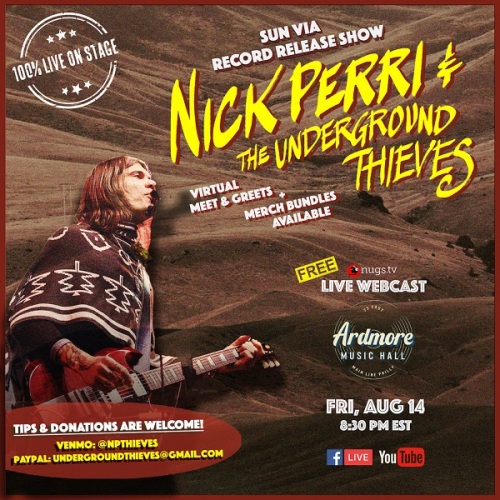 Ardmore Music Hall is one of the first venues in the country to produce live audience-free concerts available for streaming during the pandemic.

“We are thrilled to be partnering with Ardmore and Nugs.TV to bring our full stage show to fans anywhere in the world via live-stream,” said Perri. “Especially in a time like this, I think music plays an important role in uniting and up-lifting.”

The webcast will be free, but tips & donations are welcome. All tips will be split between the band and Ardmore Music Hall staff. Everyone who makes a contribution by 8/13 will be entered to win a $40 Ardmore Music Hall merchandise voucher. VIP Virtual Meet & Greet packages are available as well as ‘Virtual Front Row Access’ via Zoom. More info here: https://www.ardmoremusichall.com/fanparty/

Recorded and produced by Perri, ‘Sun Via‘ is comprised of 10 original songs—a cohesive mix of rock-, alternative-, Americana-, and psychedelia-infused tracks. The album is available now for pre-order no on Vinyl, CD, and digital here: https://linktr.ee/nickperri