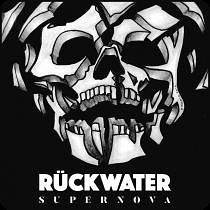 Demonstrating their rough sound in previous EP ‘Bonehead‘, Finnish stoner-rock group Rückwater is about to release their debut album ‘Supernova‘. The album provides a mixture from heavy rockin songs to a more mellow tunes. The power-trio’s sound comes from heavy riffs combined with two lead singers and a dynamic drummer.

The story of Rückwater started in 2010 when the loudest men in the band Make (vocals/guitar) and Jussi (vocals/bass) hit their stonehead`s together. Make`s brother Jape was a natural choice for drums, after all the brothers have played together for years.

The idea was just play some covers (Alice In Chains, Pantera etc) and have a good time, but after few jamsessions there was already some own songs. Playing together just clicked in natural and groovy way. In 2011 band went to studio to record several songs in ”So far Out..-sessions. When the band members other bands went on hiatus or ended, Rückwater kept on going forward. In the year 2013 the band recorded their second EP ‘What´s In The Box?‘.

In early 2016 Rückwater begin to record their third EP ‘Bonehead‘. It was recorded live like the first EP ‘So Far Out‘. Recording live is the most natural thing for the band. To catch the essence of Rückwater. It makes the record feel more raw, real and dynamic. Frustration about almost everything is maybe the main source for the whole record, you can hear it in the lyrics and the way the band plays.

After the release of ‘Bonehead‘, Rückwater continued doing little tours like in Baltia and started to plan their next recording session. The idea was to finally make a full lenght album. The band booked the same studio and sound engineer as in ‘Bonehead‘ and started to record their debut album ‘Supernova‘. The album was recorded live, to catch the groove of the band. The album is set to be released on July 23rd 2020 by Inverse Records.