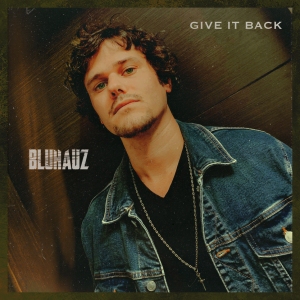 After the release of his first single ‘Purify My Soul‘ in January 2020 with recognition from Classic Rock Magazine, Perfil, Basta De Todo, Berklee College of Music, and Joe Bonamassa including the song on his Spotify playlists among others, Bluhauz launches his second single ‘Give It Back‘ on May 15 along with a music video that includes people from all over the world on quarantine celebrating the song.

In 2010, Bluhauz began his studies in Boston at Berklee College of Music. He was soon recognized among the community as a solid rock guitarist and artist. In 2014, Bluhauz was named third best blues player at the worldwide competition of guitarist Lee Ritenour. One of the highlights of Bluhauz Berklee years was his graduation where he was selected to perform Led Zeppelin songs at the Commencement Ceremony with Led Zeppelin’s guitarist Jimmy Page being at the audience and awarded with the Honorary Doctorate. After graduating from college in 2014, the touring years began. Bluhauz was frontman of the rock band Stone Giant founded at Berklee and then based in NYC. The band got major exposure and press being featured on Rolling Stone, Billboard, MTV, BBC, Spotify playlists and many more. During these years with Stone Giant, Bluhauz has gained experience performing at Lollapalooza Argentina and Chile 2016 along with artists as Eminem, Skrillex, Noel Gallagher, and Alabama Shakes among others. The band also shared major festivals with Gorillaz, Cypress Hill, Florence and The Machine, Tame Impala, and so on.

Currently based in Miami, Bluhauz launches this solo project with music produced by his production company LoSweet Records along with music videos directed by photographer and filmmaker Anne Godoneo. Bluhauz seeks to mark his return to the rock scene with a blues and rock sound with which he feels identified with and mixes his great influences from artists such as Led Zeppelin and Jimi Hendrix to contemporaries such as Gary Clark Jr. Jack White, and Rival Sons among others. In his first two singles ‘Purify My Soul‘ and ‘Give It Back‘ we see an experiment where the artist combines his hard rock and blues with dance drums and funky bass lines to give it a modern and energetic sound. The year 2020 will bring us a lot of music from Bluhauz with the release of more singles anticipating his first full album that will be released in the coming months.