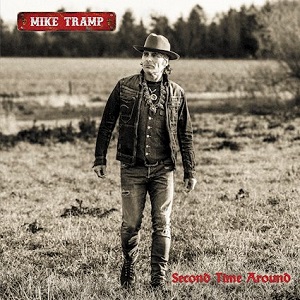 I have to admit something. Mike and I have history. Back in his Freak of Nature days, I not only saw them many times, but also supported him in Basingstoke, of all places. I’d just had my second tattoo completed and Mike and I shot the breeze for quite a while with the main man before and after the show on tattoos and many other subjects too. I wasn’t a big fan of White Lion, I really liked Freak of Nature and after ‘Capricorn’, I kinda lost track of Mike until a couple of years back when I was quite rightly told to stop being such an arse and acquaint myself with his later solo work.

It’s fair to say, Mike will never escape his White Lion days – I’ve read interviews where he complains about having to sing way above his natural range – and he has to field constant reunion questions. Mike’s solo work on the other hand, is as honest as the day is long. He seems completely comfortable in his own skin now and has turned out a high quality body of work so far.

‘Second Time Around‘ is a re-imagining of Tramp’s 2009 album, ‘Mike Tramp & The Rock and Roll Circuz’, that was only released in Denmark. Now you may think – ‘Why?’ Mike himself has said that the originals are some of his favourite tunes and were never given a chance and he missed singing them live. The question is – does it work?

Co-produced by Mike and Soren Anderson, the songs actually come across as fresh and full of life, when they could have seemed to be stale. Mike’s vocal delivery through out is warm, convincing and within his rightful range. He certainly sounds stronger vocally than I ever remember him. The songs here cover a wide variety of feelings and moods.

From the opener ‘All My Life’ which is an autobiographical tale of life in a rock and roll band, to ‘The Road’, which is deeper and darker, then on to the melancholy feel of ‘Anymore’, which deals with breakup and love lost. ‘Come On’ rocks and bops along, ‘Between Good And Bad’ is a gritty rocker, ‘Highway’ is a sunny day in musical form and ‘Tomorrow‘ is a stomping rocker. The album concludes with ‘When She Cries.’ It’s a hugely touching ballad about the day Mike’s daughter was born.

Mike has proved once again he is an excellent vocalist and a story teller of some note. This release has to be up there with the finest of Mike’s solo work and even touches the highs of his White Lion and Freak of Nature days, as it really feels like a real band collaboration on the arrangements.