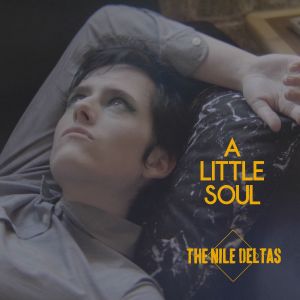 Blues rock n soul band, The Nile Deltas, are delighted to announce the release of their new single ‘A Little Soul‘ this Fri 6th March.

The single will be available worldwide via all streaming and download platforms and is taken from the acclaimed debut EP, ‘LIFE‘. ‘LIFE‘ was recorded at the world famous Rockfield Studios in Monmouth.

The single is accompanied by a new video recorded at the band’s Blue Rooms Studio.

Guitarist, Tom Lord, explains about the origins of writing and recording ‘A Little Soul‘…
“We tend to write in a collaborative way and this time Nige (Thompson, guitars) came to the table with the verse riff and with a lot of the lyrics already formed. ”

“I then focused on the musical message that I interpreted from his lyrics, which for me was the very human emotional connection that we get from a soulful vocal in a song. ”

“Although I retained an element of the soul genre musically with the bridge, then splitting the riff with a horn type arrangement, my writing contribution was more about ‘soulful’ than ‘soul’. All the great singers are immensely soulful, and the chorus lifting to the IV gave the vocals a release and allowed them to soar over it. ”

“The gospel backing vocals too, added a joyfulness to the chorus, the line ‘that the good lord provided’ being a metaphor, celebrates the ‘human-ness’ and ‘soul’ that great singers are born with.”

“The guitar solo was another vehicle for injecting ‘human-ness’, it’s an expressive instrument anyway, with vibrato being a key element to its vocal emulation, but used with a talk-box, it takes on another human element, and it’s such a seldom-used effect that it was just sheer fun to do!”

The Nile Deltas are a blues-rock 6-piece from Leicester England; an unashamed ‘song’ band with a lead vocal oozing soul.

Soaking up the influences of the bands who inspire them, The Nile Deltas have arrived at their own place, a very British rock band with an American flavour… Think early Whitesnake with a feathering of The Black Crowes, and a sun-drenched afternoon, spinning some Free.

Having cut their teeth of the local live scene, the band came-of-age at Ramblin Man Fair 2017, where they were joined by the legendary Neil Murray on bass duties.

The guys then chose the world famous Rockfield Studios to record their debut EP – ‘LIFE‘ – to bring alive their quintessential sound.

Having played the length and breadth of the UK, The Nile Deltas are now deep into writing their highly anticipated debut album, slated for release at the latter end of this year.