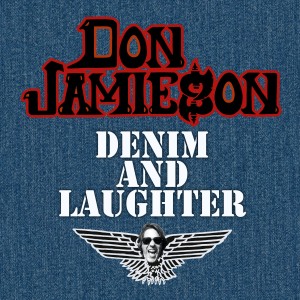 On February 21st, rock & roll comedian Don Jamieson will release his new album, ‘Denim & Laughter‘, via Metal Blade Records. Former ‘That Metal Show‘ host Jamieson comments: “This album was recorded in front of about 40 hardcore fans in a speakeasy in a secret location in Los Angeles on October 19, 2019. Now the rest of you can enjoy it!
I’ve recorded my stand-up albums in comedy clubs, rock clubs and now an illegal club. Comedy is way more fun when you’re at the risk of being raided at any moment!
Special thanks to one of my favourite all-time bands, Saxon, for letting me do the comedic version of their classic album ‘Denim & Leather‘. And I can’t wait to tour the U.K. and Europe with their singer, Biff Byford. They follow in a prestigious line of my album cover band parodies…Thin Lizzy, Judas Priest, Led Zeppelin. But of course, the album is not just for rockers, but for all people who like humor with a rock and roll attitude. Comedy is like rock and roll…it’s no fun if it’s not dangerous. And being a comedian on Metal Blade Records makes the whole package complete.”

In support of this record, Jamieson will be performing on the Monsters of Rock Cruise set to sail Feb. 8-13 before hitting the road in the UK and Europe this spring with Biff Byford. Each show will take an “evening with” format and will be split into two halves. The first half will be a comedy set by Jamieson, who will quiz Biff on all aspects of his life and his legendary career. The second half will be a live show featuring Biff and his solo band. As Biff explains: “The show will consist of some old songs, some new songs, some cover versions and some songs off the solo album.”

See below for all dates!

Check out Jamieson’s new project, ‘That Jamieson Show‘ on https://www.compoundmedia.com/, where he interviews rockers and comedians. Jamieson’s stand-up act is his take on everyday life, with a heavy dose of sarcasm. Amongst his many accomplishments, his Metal Blade Records stand-up albums – ‘Live & Hilarious‘, ‘Hell Bent For Laughter‘, ‘Communication Breakdown‘ – all debuted on the Billboard comedy charts. Jamieson also became an “Emmy Award-Winner” for his work on HBO’s ‘Inside The NFL‘, where he and long-time comedy partner, Jim Florentine, wrote, produced and performed sports-themed comedy sketches.