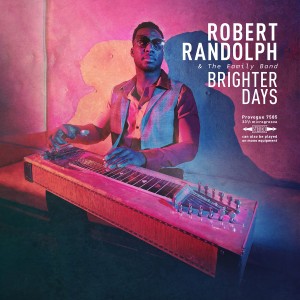 Robert Randolph and the Family Band have just revealed the new video for ‘Have Mercy‘, taken from their upcoming studio album, ‘Brighter Days‘, on August 23rd  via Provogue/Mascot Label Group. The album was produced by Dave Cobb (Chris Stapleton, Sturgill Simpson, Brandi Carlile, and Jason Isbell).

Talking about the song Randolph says, “I felt it was time I wrote a uplifting powerful song and it speaks to everyone going through some sort of pain, shame or struggles with depression. For the video we wanted to create an uplifting vibe with the choir that we used during the recording. Nashville’s Shannon Sanders and his choir totally made the vibe work even better!! We hope everyone enjoys the video, feels uplifted and puts a smile on faces all around the world.”

Randolph grew up playing sacred steel music – gospel played on pedal steel guitar – in Orange, New Jersey, and began taking his joyous, gospel-infused music out to clubs, backed by family members who shared not only backgrounds but blood.

“The Family Band” is not just a name meant to evoke connections of togetherness. They are an actual family; the group that supports Randolph is anchored by his cousins, bassist Danyel Morgan and drummer Marcus Randolph and his sister, vocalist Lenesha Randolph.

Rolling Stone Magazine voted Randolph as one of the 100 Greatest Guitarists and they have earned three Grammy nominations along their journey. It’s no wonder they have picked up an incredible list of artists who have featured on their albums such as; Eric Clapton, Dave Matthews, Ben Harper, Leon Russell, Doyle Bramhall II, Trombone Shorty, Carlos Santana and T-Bone Burnett.

“When you think about Stax music and a lot of music from the 70s, especially like the Staples Singers, it was inspirational and you danced you had a good time. That’s what we really wanted to hone in on here: let’s sound good and have a natural good time that will bring listeners along. All of the music that we played in the beginning was what we would play in church. We just turned it into long jams.”

“Over the years I’ve learned how to write these songs that make you feel kind of spiritual and have the gospel roots, just like the great music of people like the Four Tops, Temptations and Ray Charles. It all comes from the same place. We don’t want to sound like them – or like anybody – but that’s the feeling we want to evoke.”